"It's my last race with REBELLION Racing and it would be nice to end our relationship with a win."

Neel JANI secured the « pole position » for the 16th edition of the Petit Le Mans race with a fastest lap time of 1'09''254, 1.14 seconds ahead of the Muscle Milk Pickett Racing HPD car #6 driven by Lucas Luhr. 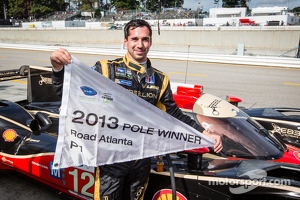 REBELLION Racing's Lola-Toyota #12 will start tomorrow's race from the first position on the grid.

This second Pole position at Petit Le Mans is the fourth that the Swiss team has achieved in the American Le Mans Series. The race will be a close one with strong competition from the Muscle Milk squad who are the ALMS champions. They will be formidable opponents to REBELLION Racing's Lola-Toyota #12 in tomorrow's 10 hour race like in the earlier races this year at Sebring, Long Beach and Laguna Seca.

Neel Jani : "We've had a good car all week long and today's result in qualifying proved that we were right in our set up choices. To be the fastest in qualifying is good for the team and provides confidence. We have to translate this result into a race win tomorrow as the race is always a different game, especially here in America with the safety car strategy and the traffic. It's my last race with REBELLION Racing and it would be nice to end our relationship with a win."

Bart Hayden, REBELLION Racing Team Manager : "Congratulations to Neel for driving the pole winning lap so well and thanks to the engineers and mechanics for working so hard to get the set up and preparation right with the car.

The 16th Petit Le Mans will be the last of the American Le Mans Series era and the last with the LM P1 cars. It is always a real pleasure to be racing in the USA, the competition is strong, and the ambience in the paddock is very friendly. We are confident with our ability to be competitive in tomorrow's race and we have experience from last year’s overall win.

Racing here at Petit Le Mans is a massive challenge for the team. Half the team and equipment are in Japan for the FIA WEC 6th round. Their race will start just about an hour after the chequered flag will be displayed here ! But we are focused on our race here, we are determined to race to repeat last year’s overall win."