Braselton, Georgia. Spencer Pumpelly, Bryan Sellers, and Andy Lally – all Porsche 911 race car specialists who live in the Atlanta area, were the stars of Petit Le Mans qualifying for the Porsche customer teams at Road Atlanta.

Pumpelly, who drives for the GTC class Flying Lizard Motorsports Porsche 911 GT3 Cup team, put the car he shares with Nelson Canache, Jr. (Venezuela) and Madison Snow (Lehi, Utah), put his car on the pole position for tomorrow’s 10-hour race at Road Atlanta. Pumpelly and Canache, Jr. are in second place in the GTC season standings, and they have a mathematical chance for the title, but they need a victory tomorrow. 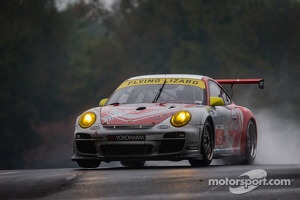 “The competition is very tough. All the cars are equal. No one is sandbagging. Every time we get to the race track; qualifying, racing or even a wet practice, it’s a contest between us. That’s one of the things I enjoy the most about it. At the end of the day, when you can get the pole with such a good field, it really feels good,” said Pumpelly.

Second in GTC qualifying was Jeroen Bleekemolen (Monaco), who leads the points with co-driver Cooper MacNeil (Hinsdale, Ill.) in the Alex Job Racing Porsche 911 GT3 Cu., They only need to finish seventh or above to clinch the title. Andy Lally took the Dempsey Racing Porsche which he will share with Patrick Dempsey (Malibu, Calif.) and Joe Foster (Suwanee, Ga.) to third place on the grid. The Dempsey car is also headquartered in the Atlanta area. 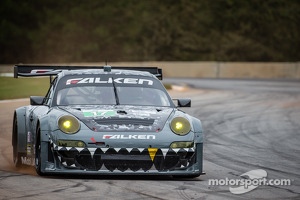 “I missed the peak of the tire, which was unfortunate, because I was in traffic in qualifying,” Bleekemolen said. “It was really unnecessary. There are only eight cars in the class and you shouldn’t have traffic in qualifying. We had the car to get the pole. I proved on the last lap when the tire had lost its peak that we were able to set a time good for second. I drove my heart out to get the pole, but didn’t get it. We just want to win the championship, but we want to win the race as well. The car is absolutely quick and strong. We have a strong team with Cooper and my brother, so we are looking good for the race,” he said.

"We've been here all week working on the car, making sure we have a good solid car for the race. In qualifying we had a pretty good race car. Our times are all really close to the front-runners. We have a few tweaks we can make and, hopefully, going into the race we'll have something that will be fast for the long duration and give us a chance," said Sellers.

“The time to establish a setup was limited by weather but most of the other teams were working with the same situation,” said Long. “We didn’t have huge hopes coming into qualifying. It’s the same situation as VIR; over a single lap we aren’t the fastest, but we feel the longer the race the better. Qualifying is really just about measuring your speed and trying to start as far forward as possible to avoid trouble. But realistically, in an endurance race after the first 10 minutes, nobody is going to remember qualifying. It’ll all be about how well the car handles over a complete stint. We’re focused on analyzing the data and understanding how the track will change between now and the race,” he said.