SEBRING, Fla.– Porsche customer teams have wrapped-up the first official test days of 2013 at Sebring (Fla.) International Raceway. Competitors from the American Le Mans Series presented by Tequila Patrón (ALMS), the IMSA GT3 Cup Challenge by Yokohama and GT3 Cup Challenge Canada by Michelin descended upon the site of the season-opening Mobil 1 Twelve Hours of Sebring to prepare for the March 16, 61st-running of the classic American endurance race. While times are of very little significance during testing, all the teams utilizing either the Porsche 911 GT3 RSR – used in the ALMS GT category – or the 911 GT3 Cup car – used in both the ALMS GTC class as well as the IMSA Development Series’ GT3 Cup Challenges – considered the week’s efforts a success. 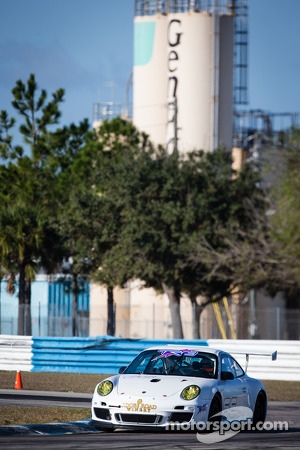 In total, 27 Porsche 911s put in laps this week on the 3.71-mile, 17-turn road course to test new combinations and refresh tired minds. The four-day test was broken into two halves with the GT3 Cup Challenges running multiple sessions both Tuesday and Wednesday and the ALMS with four-sessions spread over Thursday and Friday.

“We are very pleased with the results of the week,” offered Porsche Motorsport North America president Jens Walther. “Testing is not about setting fastest time, although that is always gratifying for the teams, but instead it is about maximizing your knowledge of the car. We will have more time for finding the race setup when the team’s come back for the Mobil 1 Twelve Hours of Sebring in March, but the lessons the teams and our PMNA staff learned this week will help us to make best use of that time. Taking part in this kind of official test is very beneficial and gives items to work on between now and when we return.”

The world’s most prolific race car, the 911 GT3 Cup is based directly on the road-going Porsche 911 which is celebrating the 50th anniversary of its 1963 public debut this year. The ALMS GTC class and the IMSA GT3 Cup Challenge both use very similar Porsche 911 GT3 Cup cars. Both divisions are highly restricted, or “spec”, and are among the most fiercely fought classes of racing anywhere in the world.

Tires were the watchword in the ALMS GT class for Porsche throughout the week. The current iteration of 911 GT3 RSR competing in North America made its public debut here at Sebring testing in 2012 and, as such, the two teams entered in the test are well accustom to the cars. However, Paul Miller Racing brings new tire partner Michelin to the fold this week with driver Bryce Miller (Summit, N.J.). Meanwhile, the No. 17 Team Falken Tire Porsche 911 GT3 RSR, being driven exclusively by Bryan Sellers (Braselton, Ga.) during the “Winter Test” – is continually developing tires as a basis for its motorsport program. The No. 17 led the Porsche contingent in each session.

The IMSA GT3 Cup Challenge by Yokohama and the GT3 Cup Challenge by Michelin are one-make development series designed to benefit young drivers and teams planning to eventually move into the ALMS as well as for gentlemen drivers who want to compete on a semiprofessional level. In total, 21 911 GT3 Cup cars built to GT3 Cup Challenge specifications tested over the course of their two-days of open running. By sunset Tuesday, the No. 6 of Kelly Moss Motorsports driven by David Ducote (Houston) had set the quickest time of the seven sessions. Ducote’s lap was turned in Session 5 on February 6.

Will the new generation DeltaWing survive?