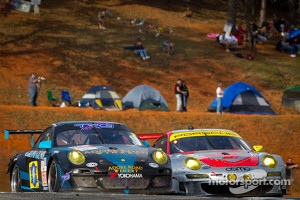 Jens Walther, president of Porsche Motorsport North America, Inc., was proud of the effort shown by all the Porsche customer teams at today’s event, and hopes that this will provide momentum that will continue for next year.

“I want to congratulate all our teams in GT, GTE-Am, GTC, as well as all our Porsche Motorsport staff, for their hard work today in front of our fans, Porsche owners, and the worldwide television and online audience. Special recognition should go to Giermaziak/H. Cisneros/M. Farnbacher in the NGT Momo Porsche 911 GT3 Cup for their first-ever ALMS win; Cooper MacNeil and Leh Keen for finishing first and second in the GTC championship for WeatherTech/Alex Job Racing Porsche team; and Piergiuseppe Parazzini/ Raymond Narac/Anthony Pons for winning the ELMS championship in their Matmut IMSA Performance Porsche 911 GT3 RSR,” said Walther.

“For our year-long GT competitors, all four of our Porsche customer entries finished in the top ten today in one of the world’s toughest GT fields. The two Flying Lizard Motorsports cars – Long/Bergmeister/Pilet and Holzer/Tandy/Neiman finished fifth and seventh respectively, while the Team Falken Tire Porsche with Henzler/Sellers/Ragginger was sixth. The Paul Miller Racing Porsche 911 GT3 RSR was tenth with Miller/Lietz/Maassen at the helm. These teams fought the odds all season, and produced results on the track we could all be proud of,” said Walther.

The #45 Flying Lizard Porsche 911 GT3 RSR of Patrick Long/Patrick Pilet/Joerg Bergmeister ran well for the 1,000 miles of the event, running between third and fifth place, but a collision with the #60 GTE-Am Ferrari late in the event affected the steering, and the team was unable to catch the front-runners. The #44 Flying Lizard Porsche of Seth Neiman/Marco Holzer/Nick Tandy also flirted with a top five finish, but an off-road excursion set them back in the standings.

“We were on our way to a podium finish, and never gave up, making up laps with good strategy, but couldn’t overcome a penalty and an off-road excursion, and the damage to the car that came with it. Still, when you look a our results over the last six races of the season, no one had better results than we did,” said Patrick Long.

For the #44 Lizard Porsche, Marco Holzer was pleased at the pace of the race, which was better than their practice and qualifying speed, but damage from an off-road incident caused the car to lose some of its handling.

“We ran well all day, but the damage from the incident hurt our performance. Still, a seventh place finish is good for us. I want to thank the team for all their efforts this season – my first in ALMS. For me, the highlight was my pole position at Road America, but the whole year was a great experience,” said Holzer.

For Team Falken Tire, the season had high and low notes, from their win at Baltimore to a disappointing showing in Virginia, but today’s race was a good one for the team.

“The race is what we hoped for from the beginning. We knew we didn’t have the outright speed, but if we did everything we needed to do, we could improve where we qualified and race our way forward. We were able to do that. Unfortunately we just fell literally five seconds short of being able to come into the top five, which would have been a huge accomplishment for us. All in all, I think today showed the resiliency of our guys and how we were able to run a race with little to no mistakes ,” said Bryan Sellers.

“Finishing sixth was a good result for us today. We really managed to set up the car and get the consistent lap times from the first lap to the last lap, which was very good. We couldn’t hold the pace of the top cars; we were missing a little bit. This is something we really have to work at for next year,” said Wolf Henzler.

The Paul Miller Racing team ended its season on a good note as both drivers were pleased to finish the 1,000-mile event.

“The car was tricky to drive. We had to give something up to support the tire the best we could. In the end, the pace was not so much the issue, but just the driver comfort. The life in the tire always is an issue here at Petit Le Mans. Road Atlanta just really works the left side very hard,” said Bryce Miller.