Holding on to the GTC class Driver and Team points championship by just a single point, the No. 30 MOMO NGT Motorsport Team has their eyes set on maintaining the points lead at this weekend’s Mobil 1 Sports Car Grand Prix race at the Canadian Tire Motorsport Park in Bowmanville, Ontario, Canada on July 20-21, 2013. 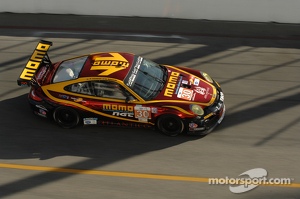 Henrique Cisneros, who is leading the ALMS GTC Driver’s Championship, will pair again with co-driver Sean Edwards, a Brit, who has been away in Europe competing in the Porsche Super Cup and Porsche Carrera Cup. Cisneros and Edwards previously paired for a victory at the Long Beach Grand Prix in April and teamed with German Marco Seefried for a third-place finish at the 12 Hours of Sebring.

The last ALMS race at Lime Rock less than two weeks ago was a little challenging, including an accident that caused damage to the Porsche 911 GT3. Is the car back together and the team ready for Mosport?
“The car is all set and ready to go. It has many battle wounds but NGT has done a great job to get it to fighting shape again.”

Have you previously driven at Mosport? If so, tell us about your race/s.
“I drove Mosport for the Porsche GT3 cup. It’s one of my favorite tracks of all time! There are lots of elevation changes and fast sweeping corners that you never really get comfortable with. It will be a whole new experience with the ALMS traffic. I'm not sure how I feel about going two-wide into Turn 1!”

Sean Edwards is back as your co-driver this weekend. The two of you paired for a win at Long Beach, and raced with Marco Seefried for a third-place finish at Sebring. Talk about how well you two match up as co-drivers.
“Sean and I make a great team. We have very similar diving styles and we both like the same setup on the car. He’s a great coach when we are looking at data and extremely impressive when he needs to push for the win. I’m pleased we get to share the car for the rest of the season so he can help me with my championship quest.”

You are currently the GTC points leader, but by only one point, going into Round Five of 10 ALMS races. How do you plan to maintain the points lead in this competitive class?
“The good news is we are still leading. The bad news is we are all basically tied so it’s back to square one! We all get to fight for the rest of the season. I just hope our bad luck is over and we can finish every race. One more incident like what happened at Lime Rock and we can kiss the championship good bye.”

You are back competing in the ALMS GTC class with Henrique and the MOMO NGT Motorsport team after being away the past two events competing in the Porsche Supercup Series and Porsche Carrera Cup. How difficult is to jump back and forth between different series as a driver?
“Yes, it’s a shame I had to miss the last two events with my other commitments. It’s not as difficult as the cars are similar, but the biggest difference is the tire. But I am well used to jumping between cars now, so I don’t even have to think about it. The worst was jumping between the Mercedes SLS and the Porsche Cup on the same weekend at the Nurburgring 24 Hours!”

Have you previously driven at Mosport? If so, tell us about your races.
“No, this will be my first time. I have done many laps on the simulator. It looks like an awesome track. I love high speed commitment corners, so this will suit me very well. It looks like the Spa of America!”

Henrique and MOMO NGT Motorsport have been able to hold on to the GTC class Driver and Team points lead by just one point. How critical is Mosport in the ALMS GTC points chase this season?
“It’s good that we are still leading. It makes my job easier for the rest of the year! Last time out they had a bad race, so we lost our big advantage. There’s still a long way to go and anything can happen. We will try our best to score another win in Mosport, but more critically we must always score good point. You don’t need to win every race to become champion.”

How important is it to you to help your teammate win the 2013 GTC championship even though you are out of the points chase?
“Very important! I have been working with Henrique and NGT for three years now. This is their first full season assault on the ALMS and they deserve to win it. I will do everything possible to make this happen!”

The team suffered an accident at Lime Rock less than two weeks ago that caused damage to the Porsche 911 GT3. Is the car back together and the team ready for Mosport?
“Unfortunately Lime Rock didn’t go our way. Once in a while you have a race like that but at the end it makes you stronger and work harder. That’s part of racing. We are still leading the points and intend to keep it that way. We are ready for Mosport.”

What has the team’s previous experience and successes been at Mosport?
“Mosport is my favorite track. It has a bit of everything you look for as a racer. I call it a ‘Big Boy's Track’. We have a lot of experience at Mosport and won multiple times in the past.”

Sean Edwards is back as Henrique’s co-driver. Why does their paring work so well?
“Henrique won Petit Le Mans with Kuba Giermaziak and Mario Farnbacher. He won Laguna Seca with Nick Tandy, lead the majority of the 24h Daytona with Patrick Pilet, Kuba and Sean and won Long Beach with Sean. It’s obvious one of Henrique’s strengths is working well with all drivers. Not all drivers can do that.”

The GTC class is very competitive but the MOMO NGT Motorsport team and Henrique have been able to hold on to the Team and Driver’s points lead. How critical is Mosport in the ALMS GTC points chase this season?
“Every race is critical for the points chase, especially when the competition is so strong this year like never before in ALMS GTC. We are ready to give our fans a good show.”