Having won the last four races this season, Pickett Racing is looking to tie the record it set last year,

INDIANAPOLIS - After being part of history making finishes the last couple of races at Road America, the Muscle Milk Pickett Racing team is hoping for a less dramatic end to this year's Orion Energy Systems 245.

Last season, the Muscle Milk squad and Dyson Racing gave fans the closest overall finish in American Le Mans Series history at the 4.048-mile, 14-turn road course with Dyson picking up the win and Pickett Racing coming in a mere 0.083 seconds behind. 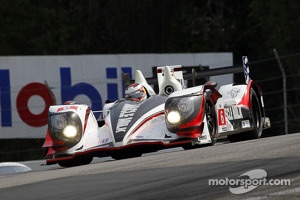 However, had it not been for Klaus Graf and Lucas Luhr's amazing comeback from a four-lap deficit, the history making finish would never have happened.

The previous year, the Muscle Milk team wound up crossing the finish line 0.112 seconds ahead of Dyson Racing for what was at the time the closest overall finish.

While the team is wishing for a more 'relaxing' finish to this year's event, it is well aware that the Elkhart Lake, Wisconsin track has provided teams and fans with some very exciting racing in the past and the Greg Pickett-led team is ready for the challenge.

Having won the last four races this season, Pickett Racing is looking to tie the record it set last year by scoring five consecutive overall victories in one season.

Muscle Milk Pickett Racing enters Round 6 - which is now a two-hour 45-minute race, down from four hours - with a 44-point advantage in the P1 Team and Driver Championship standings.

The action gets underway on Friday, August 9 with two one-hour practice sessions. Qualifying will take place on the morning of Saturday, August 10 and will be streamed live on ESPN3.com and ALMS.com starting at 10:30 am ET.

The Orion Energy Systems 245 at Road America will be broadcast live on ABC on Sunday, August 11 from 3:00 pm ET.

Klaus Graf - driver #6 Muscle Milk HPD ARX-03c: "Road America produced some unbelievable ALMS racing in the last couple of years. The race finishes have always come down to the last lap and we were always in the mix, going for the overall win.

"Muscle Milk Pickett Racing is looking forward to another great race at Road America. Our HPD ARX-03c should perform very well there and with our recent performance at Mosport, it gives me a lot of confidence for this year's race at the Elkhart Lake track.

"This will also be the first shared event with GRAND-AM so it's going to be interesting to see how this all works out in preparation for the USCR in 2014."

Lucas Luhr - driver #6 Muscle Milk HPD ARX-03c: "I look forward to the Road America race. It's one of the best tracks in the United States, if not the best. It's definitely given fans some very exciting racing.

"I hope we can improve on last year's finish, especially after losing the race last year by only 8 hundredths of a second!

"With the progress we've made on our Muscle Milk HPD ARX-03c, I think we have a good chance at the win there, but you never know what can happen in racing. It will also be different this year with the race being only two hours and 45 minutes instead of the four hour race we are use to."