Team Peugeot Total launched its 2008 racing program Friday, with a primary focus again on the 24 Hours of Le Mans. Three Peugeot 908 HDi FAPs have been entered for the twice-around-the-clock French classic. A two-car attack in the European-based Le ...

Team Peugeot Total launched its 2008 racing program Friday, with a primary focus again on the 24 Hours of Le Mans. Three Peugeot 908 HDi FAPs have been entered for the twice-around-the-clock French classic. A two-car attack in the European-based Le Mans Series and a debut run in the American Le Mans Series' season-opening Twelve Hours of Sebring has also been confirmed, along with the 10 drivers who will pilot the LM P1 diesel coupes this year. 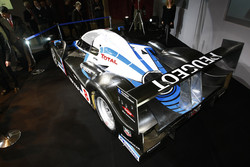 "Our work has focused on saving weight and extracting superior, reliable performance from the engine with a view to enabling us to race at the same pace as we lap in practice, not to mention the optimization of every one of the car's components," technical director Bruno Famin said. "Given the little time we had last year, this was something we weren't able to do with the 2007-spec car. In addition to ongoing work on the aerodynamics, our programme has benefited the suspension, steering, differential and gearshift control. However, because of the weight inherent in the diesel engine, we have yet to get down to the minimum 900kg weight threshold specified in the new regulations."

An impressive group of drivers have been contracted by Peugeot Sport to race this season. Sarrrazin and Lamy return, along with Marc Gene, Nicolas Minassian and Jacques Villeneuve. Christian Klien, Franck Montagny, Alexander Wurz and Ricardo Zonta all join the team. Also new is Anthony Beltoise, who has been named test and reserve driver. The exact driver pairings for Le Mans will be announced in May.

After a promising run in 2007, Villeneuve returns to Le Mans with hopes of finally taking the crown. The 1997 Formula One World Champion and former winner of the Indianapolis 500 has recently taken on a new challenge by racing in NASCAR. Villeneuve will be running for Rookie-of-the-Year honors in the Sprint Cup Series in 2008, but got off to a rocky start by failing to qualify for the season-opening Daytona 500. He might be forced to miss at least one more race this season, due to a date conflict with Le Mans. 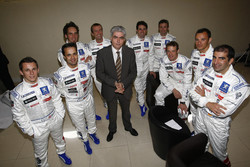 Drivers for 2008.
Photo by Peugeot Sport.

Like Villeneuve a year ago, Klien will be making his debut at Le Mans. The BMW Sauber F1 test driver has 46 Grand Prix starts under his belt, earning a best finish of 5th in the 2005 Chinese Grand Prix when driving for Red Bull Racing. In contrast, Peugeot teammate Montagny is no stranger to La Sarthe, having six previous starts, including a second place finish overall in 2006. The Frenchman also has open-wheel roots, having been Toyota's third driver in F1 last season. He also drove seven races for the Super Aguri F1 Team in 2005.

Wurz will be making his second Le Mans start but will be aiming to keep his perfect record. The Austrian won the French classic in 1996, co-driving a Joest Racing TWR Porsche with Davy Jones and Manuel Reuter. Like his counterparts, Wurz has plenty of experience in F1, including three podiums in 69 race starts. In addition to his duties with Peuegot at Le Mans, he has been named Honda F1's third driver this year. Zonta is another F1 driver but has since shifted his focus to sportscar racing. While the Brazilian has never raced at Le Mans, he won the 1998 FIA GT Championship and currently competes in the Grand-Am Rolex Sports Car Series.

Beltoise rounds out the impressive lineup. The two-time Porsche Carrera Cup champion joins the organization as a test and reserve driver. The Frenchman is also tabbed to compete in a partial season of the LMS, co-driving a Farnbacher Racing Ferrari.

Between the ten drivers, they boast 393 Formula One starts as well as 32 previous runs at Le Mans. Peugeot Sport director Michel Barge explains the recruitment process: "Like last year, we wanted our 2008 line-up to be strong, very human, sporting and bonded. During the recruitment process, which was led by Serge Saulnier, we paid attention to all these factors, as well as the respective records and experience of the drivers in cars which are in fact very close to the 908 HDi FAP in the way they need to be set up and driven."

While Le Mans will take center stage, the Peugeot will also be back in the LMS to defend its title with the aforementioned driver lineup of Gene/Minassian and Lamy/Sarrazin. The battle for the crown this season should intensify with the arrival of Audi Sport Team Joest, which enters two of its diesel machines to go up against the French lions. 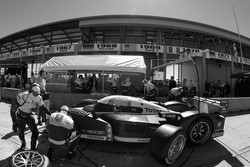 Peugeot Total team members at work on the Peugeot 908 HDI FAP while Pedro Lamy waits in the car.
Photo by Eric Gilbert.

However, both teams will first face off at the Twelve Hours of Sebring in March. After a successful debut on North American soil last month at the Sebring Winter Test, a single Peugeot 908 HDi FAP has been entered for Minassian, Lamy and Sarrazin. Many drivers agree that racing 12 hours on the famed Sebring circuit is equivalent or even more difficult to tackling the 24 Hours of Le Mans. Over the years, the bumpy and brutal circuit has been known to be a car breaker. Peugeot hopes to gain valuable data at Sebring to further develop its LM P1 contender.

"We will be out to defend our [LMS] title, without losing sight of the fact that our priority is the Le Mans 24 Hours," Barge continued. "We will face some fierce, experienced competition. That's what we wanted and that's what we've got! This promises to be especially valuable because we will have four races -- Sebring, Barcelona, Monza and Spa -- before the big one at Le Mans. The calendar is extremely busy and calls for complex logistics because we have also programmed numerous test sessions and simulation runs."

Peugeot will be unable to attend the LMS official test at Paul Ricard on March 2-3 due to the busy schedule. Also, Barge addressed the possibility the team entering the ACO's Shanghai 1000km race in November, but voiced his discontent of it not being part of the LMS calendar. The decision whether or not to compete in the Chinese event is expected to come after Le Mans.