The MOMO NGT Motorsport Team has spent the test and practice session acclimating three new drivers to the challenging 3.58-mile, 17-turn Sebring International Raceway this week, as well as working on setup for the 61st Annual 12 Hours of Sebring race, March 16. 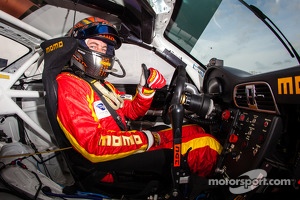 The No. 30 MOMO Porsche GTC car features MOMO owner/driver Henrique Cisneros, Brit Sean Edwards and Sebring rookie German Marco Seefried. The No. 31 MOMO entry has drivers Kuba Giermaziak, Mario Farnbacher and Carlos Gomez, who is the only experienced Sebring driver in the car.

Ramez Wahab, MOMO NGT Motorsport Team Owner: “We have three drivers from Europe with us this week that never drove here before. Sebring is known to be a historic track and actually very hard track on a driver and on a car, and a tough track to learn. We are always surprised when we hear that because it is our ‘home’ track and, of course, for us very easy. But we know everybody who comes here the first time has issues. It’s okay actually. We told them not to push too much. That’s the same thing we did last year at Petit Le Mans with Kuba (Giermaziak) and Mario (Farnbacher). We told the guys to keep the car in one piece, get the pace and just be on the track and finish the race. It ended up that we won the race. Road Atlanta is a very tough track also, but Sebring is always special. Today we were mainly bedding the rotors and the pads in and that’s what Sean (Edwards) did. We don’t want to have problems like we did at Daytona, where we were leading the race and a rotor exploded. I’m confident. The speed is not there yet but I’m sure we’re going to qualify pretty decent and it’s a 12 hour race so a lot can happen.”

Henrique Cisneros, MOMO owner/driver No. 30 MOMO NGT Motorsports Porsche GT3: “In ALMS, it started a little bit rocky for us. We were not really happy with the way the car was handling and the overall setup we had. We were trying out a new suspension we had not worked with before and we couldn’t squeeze out the performance we wanted from it. We ended up ditching the new one and returning to the old suspension we had worked with the past two seasons. Immediately on the first session after the change, we were already on the top of the time sheets. It was the right decision to make. Overall, we are getting there. We are at the top of the time sheets and we have a little more work to do to have the comfortable car we need for the 12 hours race. I’m confident the team will get the performance we need out of the car.

“The 12 Hours of Sebring is a classic race that everyone wants to race and be involved in. It’s one of those races that has such a strong heritage. To race here is a great honor for us. This will be our third year doing the 12 Hours of Sebring. The first year we had a good year and ended up third. Last year we had a strong event and were leading much of the race but unfortunately had a part failure and ended up crashing. We definitely want to come back this year and go for the top step of the podium. We’ve been working very hard at it and feel we’re prepared. Coming off from the win at Petit Le Mans last fall we have the confidence and know that we have the team to get it done. It’s just a matter of all the cards lining up and being able to make it to the end of the race.”

Marco Seefried, driver No. 30 MOMO NGT Motorsports GTC class and Sebring rookie: “First of all, I’m very happy that I’m here. I didn’t expect it because it was a last minute call. I’m proud to be in a Porsche at Sebring with MOMO and NGT in the GTC class. I think we have a pretty good team here with Sean Edwards and Henrique (Cisneros) is real fast for an amateur driver, so I’m looking forward for the race. I have never been here to Sebring before and the track is quite challenging, so I still have to work on my drive. I’m looking forward to it. We still have some practice time and when the race starts I’ll be right there and we’ll go for it.”

Sean Edwards, driver No. 30 MOMO NGT Motorsports GTC class: “We had a difficult start. Things have changed a lot since last year with the tires and we’re running a different damper. It was difficult to start when we were trying to develop the setup and we had to basically go back to the setup we had last year. The car is now much better. Now we can develop it even further with the front end and hopefully in time for qualifying we should be going right on pace. But the most important thing is getting the car ready for the race and to have a good setup so all of us can drive it and get to the end and see where we are and really try to press for the win like last year.”

Kuba Giermaziak, driver No. 31 MOMO NGT Motorsport driver GTC class and Sebring rookie: “The track is one of the toughest tracks I’ve ever been to and I’ve already been to many tracks around the world. It is really interesting like Turn 1, Turn 17 are really places where you need some laps to get confidence. I have not had so many laps yet but we are okay on the pace. We have some struggles still on the car but we are going in the right direction, which is the most important thing. I’m quite sure our strong part should be the race pace and I think we will maintain it well too. Hopefully we won’t have any problems like Daytona. If we finish the race, I think it will be good.

Carlos Gomez, driver No. 31 MOMO NGT Motorsport driver GTC class: “It’s been a good week for us preparing for the big race. I’ve been getting a lot of seat time in the GT3 Challenge series. My co-drivers have been doing most of the legwork in setting up the 12 hour car. I think we’re ready to go. Friday we plan to be smooth, practice driver changes, make sure all of us are comfortable in the car and it should be a good day Saturday. We’ll see how qualifying goes. We have a good car. It’s easy to drive and the team has been working hard on that. I think it’s going to be a great race for us.”

Mario Farnbacher, driver No. 31 MOMO NGT Motorsport driver GTC class and Sebring rookie: “I’m still learning the track. It’s not easy. It’s harder than the Nordschleife (Nurburgring) with the bumps. So far we are struggling a little bit with oversteer but we’ll see how the next session will be. It’s not easy and quite hard to learn but hope to be better after the night session.”

Angel Benitez, Jr., winner of IMSA GT3 Challenge Cup Race 1: “I’m very happy for today’s result and that the race was very hot outside. I didn’t expect it to be that hot actually. We had a good start. We made a four or five second gap. I think we were under control until that point but I think I was trying to push the car too hard maybe. I started to have problem with the rear of my car. That’s actually when Madison touched me. We were fighting and having fun but it was really difficult. Suddenly he hit me at Turn 7 and broke his radiator. After that it was an easy race with the other drivers. I’m happy for the victory.

“This was my second race at Sebring. I won both races in Gold class here last year. I’m trying to use all the knowledge I have from the old car for this car. Everything just went right. We had the pole position with the track record in qualifying, the fastest lap and the victory. We look fast. We have to keep the MOMO NGT car right there in the top. We have a good shot for the championship but there is still a long way to go. Working as we are working right now, we can make it happen.”

Alexis can de Poele, driver of MOMO ANSA Motorports IMSA Lites: “I qualified eighth and didn’t get a bad start. I was on the outside and the guys behind got a better start than I did and a few guys got through. I think I dropped back to about 11th place. After I found my rhythm and fought with a few guys, I found out where I could be stronger than them and got through the field and started passing a few guys and got all the way up to fifth.

“I’ve been watching all the 12 Hour races at Sebring since my Dad began racing here in 1995. I knew all the things that drivers would talk about like the tricky corners and yet that kind of preparation, it’s always new, so you have to discover how it is from the inside. It’s really, really hard, especially between Turn 17 and Turn 1. You’ve got to really go through laps and laps and laps to get better each time. I know I can still improve now. But I really enjoy the track. Maybe we enjoy all tracks until we end up in the wall. I really enjoy it. It’s really fast, fast corner. In Belgium, apart from Spa, which is special, the other tracks have very slow corners. None have very fast corners like here. I think it’s the first time I get through a corner as fast as Turn 1. After a very long straight line, you just brake a little, down gear and flat out through the corner.”

MOMO is recreating a fond memory in the IMSA Paddock Friday afternoon when they host a ‘MOMO Pasta in the Paddock’ gathering for team owners, drivers and media. Cooking pasta for the teams was a popular tradition started by MOMO founder and racer Gianpiero Moretti in the 1980s.