The MOMO NGT Motorsport team arrived at the Road Atlanta circuit in Braselton, Georgia with the hope that they would leave with the coveted GT Challenge (GTC) first place trophy in the 1,000 mile or 10 hour Petit Le Mans race. The No. 30 Porsche 997 GT3 Cup secured their goal.

“Winning the 10 Hours of Petit Le Mans is an amazing accomplishment for any driver. It is a race that usually attracts the top racing talent from around the world and a win in such a competitive environment is extremely gratifying,” said Henrique Cisneros.

Having a fast car for the long distance was important.

For their entry in the American Le Mans Series season finale, NGT team owner Ramez Wahab selected Mario Farnbacher (Ansbach, DE) and Kuba Giermaziak (Gostyn, PL) to team up with Cisneros (Miami, FL) for the challenge. Wahab was quick to note that one reason for their success was a “trouble free race”; an important aspect in endurance racing.

NGT was very confident in a podium finish. “Having a fast car for the long distance was important,” said Wahab. That confidence paid off in the end.

Farnbacher, Giermaziak and Cisneros were aware of the speed differential between their cars and that of the Prototype, and the hope of staying on-track was one they could not control as Cisneros explained: “Unfortunately, we were taken off-track twice in the esses by prototypes. Luckily we did not have any damage to the car. Many times, the prototypes forget that a GTC car is not able to go off-line and steer back in time to make the turn. We are low downforce cars with a very small margin of error when we are taking a turn at the limit. Any modification to our line mid-corner usually ends in an off-track excursion.”

The Petit Le Mans reached the 1,000 mile mark before 10 hours had been reached. NGT took the checkered flag at 9:38:20.034; five laps ahead of their closest rivals. Strategy is always a key, and for the longer endurance events it is vital. When asked if they were able to stick to their original plans, Wahab said “Absolutely, we knew that we needed a splash of fuel towards the end of the race, so we were trying to get a big enough gap to allow us to fuel, and yet get back on track in the lead. Once we noticed that the 2nd place car had some issues we pitted conformably, added some fuel and finished the race 1st.”

Cisneros commented: “Race strategy is always an art and a science. We always start with a concrete plan that changes based on the variables. We originally planned on single-stints with all the drivers but the cooler temperatures during race day allowed every driver to double stint the first time out.” 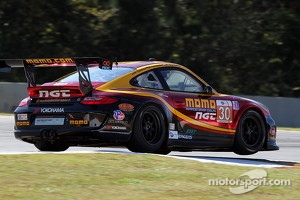 All three drivers were able to keep the MOMO Porsche in the hunt for the win during the stints, and taking care of the equipment was another key during the race. “In an endurance race you are always concerned about multiple things, mechanical failure is one of them, and my main concern was the gearbox,” Wahab said.

Wahab’s NGT Motorsport is proud to announce that they will carry the MOMO name into the future. They plan to field 4 or five Porsches in the IMSA Porsche Cup series, and of course they will contest the ALMS GTC category.

Cisneros said, “I will run the full season in 2013 in GTC with Sean Edwards.”

As his thoughts now turn to next year, Wahab said, “The pressure is always on.”

The problem with green hornets

Sean Edwards Trophy to be awarded in 2015