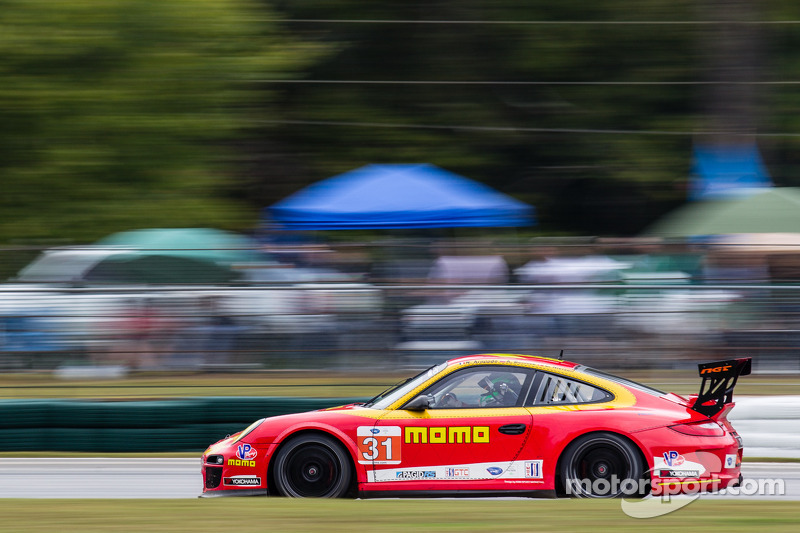 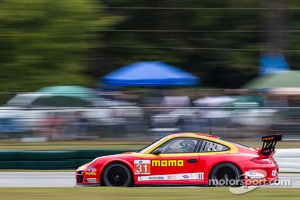 After the death of teammate and friend, Sean Edwards, earlier this week, the team decided to withdraw the No. 30 entry and only compete with the No. 31 MOMO NGT Motorsport Porsche GT3.

After a special tribute lap to Edwards, with the No. 30 car wrapped in special graphics and driven by teammate Henrique Cisneros as part of the Petit le Mans pre-race ceremonies, No. 31 drivers Angel Benitez, Christina Nielsen and Nicolas Armindo were ready to go out and capture a victory for the team.

Armindo started the No. 31 MOMO NGT Porsche car from the sixth qualifying position and quickly drove it to the GTC class lead. Other than a penalty for taking a pass around under caution, the team looked solid for a podium finish. Six hours and twenty minutes into the race, Benitez was hit by a competitor, which caused radiator damage and sends the Porsche to the MOMO NGT garage for 12 minutes of repairs, costing the team eight valuable laps, from which they would never recover.

The No. 31 entry was able to finish the 15th and final ALMS Petit Le Mans race in the seventh position. The finish helped the NGT team capture third in the 2013 ALMS GTC class Team Championship. Young Venezuelan driver, Benitez clocked the fast time of the drivers with a 1:26.003 on lap 203.

Henrique Cisneros, MOMO principal/driver of the No. 30 MOMO NGT Motorsport GTC class Porsche: “It was one of those races where things were going very well in the beginning and then we started having some issues. The important thing is we went from three laps down to being on the lead lap again. Everything was going well and things were looking up and then, unfortunately, we got into an accident, which put us 9 laps down. All-in-all, the team did a great job. We pushed through until the end and we’re all very happy with the results. Christiana did a great job driving, as expected, as did Angel. I think if anything, it gave closure to the season .”

Angel Benitez, No. 31 MOMO NGT Motorsports GTC class driver: “We really tried to represent NGT and the #30 MOMO car, which had been racing all year. We worked hard and put as much as we could. I think we were in a really good position for podium for sure. Unfortunately we had a problem with one of the Flying Lizard cars that was trying to block us to help their other car to get by. We were hit and it broke the radiator and we had to come into the garage to make the change, which cost us nine laps. Then we had with one of their drivers. At the end, it was like being in a war. It was really hard with a lot of things going weird. We were glad to have the car finish. Christina did a really awesome job.

We have to congratulate her because she drove really, really well. We wouldn’t be here if not for MOMO and NGT, so I want to say thanks for the invitation to drive with them. We could have done way more than we did, but that’s racing. Racing is not perfect, it’s just racing. Whatever happens, you have to stick with it. We hope we get another chance to demonstrate it.”

Christina Nielsen, No. 31 MOMO NGT Motorsports GTC class driver: “I love the race and love the team. We made the best out of the circumstances surrounding the race. Hopefully I’ll be back in the States and will look forward to it. I also hope to be back with NGT or another good team but I definitely liked it here and I would love to return.”