After their first race in Daytona 24, MOMO will have a two-car assault in the American Le Mans Series at the 12 Hours of Sebring. They also will contest the European Le Mans Series.

The iconic brand of MOMO is increasing its commitment to racing in 2013 with a presence in many racing series across the globe. 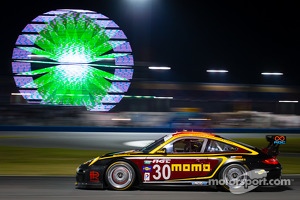 In the U.S., MOMO will launch a two-car assault in the American Le Mans Series (ALMS) at the 12 Hours of Sebring with two Porsche GT3 cars in the GTC class. The legendary No. 30 MOMO-liveried car will feature MOMO owner/driver Henrique Cisneros, Brit Sean Edwards and German Christian Englehart. The No. 31 MOMO-liveried entry has drivers Kuba Giermaziak, Mario Farnbacher and Carlos Gomez. Both cars will be expertly prepared by NGT Motorsports. The No. 30 entry will be a full-season ALMS effort with Cisneros and Edwards.

The MOMO flag will also be flown on no less than seven Porsche GT3 Cup cars, all under the NGT Motorsports stable. The cars are all competing at Sebring in the IMSA GT3 Cup Challenge by Yokohama race as follows: No. 23 Ary Krau, No. 24 Mark Llano, No. 25 Angel Benitez, No. 26 Carlos Gomez, No. 27 Daniel Duerson, No. 28 Amadeo Quiros and No. 29 Eduardo Cisneros.

Additionally, MOMO is supporting Dominican driver RJ Lopez in the Gold class of the Porsche IMSA GT3 Cup and Alexis van de Poele in the IMSA Lites L1 class events, both entered at Sebring by ANSA Motorsports. RJ Lopez is a former Dominican Republic GT champion and runner-up in the 2010 Trans Am series. Alexis van de Poele is the son of the great Eric van de Poele; a two-time 12 Hours of Sebring, three-time 24 Hours of Daytona and five-time 24 Hours of Spa winner. Eric will be present at Sebring and provide his son Alexis with precious parental advice!

Finally, MOMO will expand to Europe this year with the sponsorship of a two entries program in the Porsche Supercup and one Audi R8 in the European Le Mans Series (ELMS) GTC class, both racing under the new MOMO-Megatron Racing banner. MOMO will be announcing in the very near future its full driver line-ups for these two programs.

“The new MOMO owners are clearly very familiar with MOMO’s racing heritage and they share founder Gianpiero Moretti’s racing ‘DNA’ in their passion for the brand combined with their active participation in motorsports,” said MOMO’s CEO Massimo Ciocca. “Times have changed, but for now, we have gone back to our IMSA roots through our entry in the GTC category in the ALMS, with the red and yellow color scheme that reminds the fans of the iconic MOMO colors, upgraded with 21st century graphic design technology with chrome paints and fluorescent lines. For 2013 we have also expanded to additional series such as IMSA Lites in the US, the Porsche Supercup with the brand new Porsche 991 GT3 Cup car, and the ELMS with an Audi R8, to further highlight and increase the footprint of the popular MOMO brand. Needless to say, MOMO is definitely back to professional racing and we look forward to what the future holds for the company.”

The historic 12 Hours of Sebring race will be held on Saturday, March 16.