Malucelli turned a fast lap of 1:18.861 (115.951 mph) to earn his second pole of the season in the No. 62 Risi Competizione Ferrari F458 Italia co-driven by Olivier Beretta and Robin Liddell. Malucelli, who won his first career pole at Mazda Raceway Laguna Seca in May, joined Beretta in winning the most recent ALMS race at Virginia International Raceway.

“For sure we are in a great position for starting the race, but the race will be more than nine hours, so it’s only a starting point,” Malucelli said. “Tomorrow I hope we’re in dry conditions. We have a bit of a problem in the rain.”

Antonio Garcia qualified fourth in the No. 3 Compuware Corvette C6 ZR-1 co-driven by Jan Magnussen and Jordan Taylor, 1:19.128 (115.560 mph). Garcia and Magnussen enter the finale with a 16-point lead over BMW driver Dirk Muller (125-109). Muller qualified fifth in the No. 56 Crowne Plaza BMW Z4 GTE co-driven by John Edwards and Bill Auberlen for BMW Team RLL. Garcia and Magnussen will clinch the title by finishing seventh or better even if Muller wins. 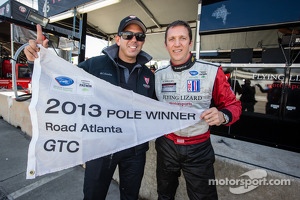 Spencer Pumpelly captured his third pole of the season in GT Challenge (GTC) qualifying. He ran a lap of 1:24.118 (108.704 mph) in the No. 45 Venezuela/eSilicon/UIS Porsche 911 GT3 Cup he shares with Nelson Canache Jr. and Madison Snow for Flying Lizard Motorsports. Pumpelly, who also led qualifying at Lime Rock and Road America, now has four career ALMS poles.

“When you get a pole on a day like today, you really hold it with regard,” Pumpelly said. “This is a home race for me, living in downtown Atlanta, and the last qualifying session for the ALMS. Tomorrow we have a very slim chance at the driver’s championship, but we can end up with the team championship so we’re going to stay focused and do our best.”