Italian Matteo Malucelli handily put the Ferrari 458 Italia on the GT class pole at the 2.54-mile Road Atlanta circuit with a time of 1.18.86.

Coming off its first victory of the 2013 ALMS season at Virginia International Raceway (VIR) two weekends ago, Italian Matteo Malucelli handily put the Ferrari 458 Italia on the GT class pole at the 2.54-mile Road Atlanta circuit with a time of 1.18.86. It was Malucelli’s second pole this season, the first having been at Mazda Raceway Laguna Seca in May.

The Risi team felt it was primed with a good car for one of the team’s favourite tracks on the ALMS calendar and, after using diligence in preparing a set-up, it was confident it could play well in both qualifying and the race. By Friday morning the confidence level was high, as long as everything went as planned. Proper planning and preparation was therefore key when Malucelli clinched the pole on the second of his three flying laps in the 15-minute qualifying session, beating the two SRT Vipers. 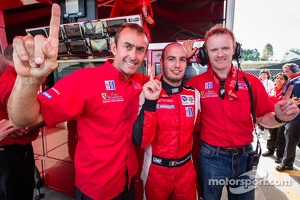 Matteo Malucelli: “We did our best and stopped before the finish of the session because I had done the maximum, hoping it would be enough. I did four laps and then we waited for the other drivers to make their best and hoped my laps were enough. At the end we are on pole so it’s a good place to start the race. The race will be nine hours but we start from the front so it will be good.

“We are hoping for dry conditions because our car is very good in the dry. We have a little bit of a problem in the rain but the forecast seems good so we are confident for the race.”

Giuseppe Risi: “I'm very happy to see us on the pole again with Matteo. We've been on pace all weekend and we're very happy about the weather today. We have a good car and we'd like to try and follow up from our last performance at VIR, but most of all because this race has a special significance in that it is the last ALMS one as we know it. It's special to be on the pole and obviously it would be even more special for us to do well.

“I've always felt, and said, that the pinnacle of representative GT racing in the world is here in the ALMS. You can see that from the works teams that are here, and the fact that Porsche is going to have a full works team in North America next year and there is also talk of a couple of other manufacturers. Other than the 24 Hours of Le Mans, I think this is probably the best represented GT race or series in the world and one of the championship’s flagships in the United States along with Sebring. And next year we will also have the Daytona 24 Hours – making it even better.”

Rick Mayer: “We did a little practice qualifying this morning and we had a couple changes for qualifying this afternoon. We normally try to get it done early and save our tires for the race. Matteo did a good job; he did two quick laps and both of those would have been pole. He's pretty happy with the car and we'll see how we do in the race and hopefully we'll have a good warm up.”