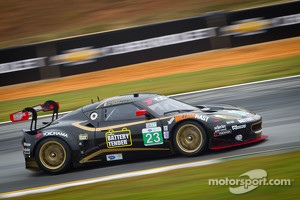 Bell (San Luis Obispo, Calif.) had the controls of the No. 23 Alex Job Racing Lotus Evora GT for the start of the 10-hour Petit Le Mans at the challenging 2.54-mile,12-turn Road Atlanta circuit. On lap ten the Californian reported "unnecessary contact" with the No. 17 Porsche. Thirteen laps later the contact manifested itself into a right rear lower control arm failure. Bell pitted, under green, and it took the Lotus AJR crew 10 laps to make the repairs and return him to the race. From lap 33 forward the Lotus Evora ran flawlessly in the hands of the AJR trio.

"It was a tough race," Bell said. "Just ten laps into a 10-hour race I got hit by the Falken Porsche for no reason. It took its toll on the car as I had to pit a few laps later and the team had to make repairs. That cost us 10 laps and that was our race. After that the car ran well. Johnny and Bill did a nice job behind the wheel, and the team was performing in the pits. It makes you think what might have been. It has been a development year, and we are already well into the planning for next year. I really like this kind of racing and the series races at some great tracks."

Sweedler (Westport, Conn.) likes the way the car ran and is optimistic for the future.

"It was unfortunate that Townsend got hit early on," Sweedler said. "The Falken car just assaulted the rear of our Lotus. We had to make repairs, which put us 10 laps down. That is a little upsetting, without that incident we had a fifth or sixth-place car. After that the car ran great. I am proud of the team and all our sponsor partners. It is tough not racing for a podium or win, but they did a great job helping us to develop this car all year. That we can be proud of and take onto to 2013."

Mowlem (Charvil, UK) is not happy with the result, but is proud of the effort.

"It is such a shame we had the rear right track rod break," Mowlem said. "The car ran like clockwork all day, and that is a testament to all of the hard work that Alex, and the team have done this season. I have to say that Townsend and Bill drove an absolutely phenomenal race today. The team definitely deserved better than an eleventh for sure. My first stint was very hot. I struggled with a drink's bottle, and I doubled stinted. My second run was really good. I had a long yellow, so I ran most of my laps in the darkness. In the evening our lap times were a second closer to the top GT competitors. Although the result didn't show it, I am happy with the overall effort today."

Alex Job, team principal, put a cap on a development year with the Lotus Evora GT.

"We had a tough start to the race," Job said. "Townsend had contact with the Falken car and that broke the tow rod on the right rear. It took a few laps to get the car back out, but once we did it ran flawlessly to the end. We would have been further up the finishing order by at least five or six places if not for that incident. But, the car ran great the rest of the race and went all ten hours today. That is a testament to the development work we've done the car and a motivator for next year."