Sunday’s flawless performance for the No. 551 car puts Scott Tucker into the lead of the P2 championship, 4 points ahead of teammate Marino Franchitti. Watch video below.

Elkhart Lake, Wis. — Level 5 Motorsports and Scott Tucker made another significant step towards their fourth consecutive American Le Mans Series presented by Tequila Patrón championship on Sunday with a dominant win in the Orion Energy Systems 245 at Road America. 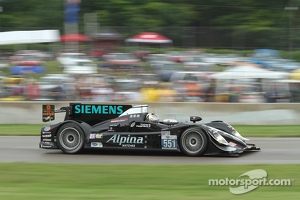 Both cars fought through challenging conditions early in the 2-hour and 45-minute race, as rain drenched the legendary 4-mile Wisconsin circuit shortly before the green flag. Starting drivers Tucker and Gonzalez, however, had solid opening stints, with the nine-time national driving champion pitting from the lead shortly past the 1 hour mark to hand over to Pagenaud and a change to slick Michelin tires.

Split strategies between the two Level 5 cars saw the No. 552 HPD of Gonzalez, which pitted earlier in the opening hour for slicks, take over the lead, with the recent Le Mans winner enjoying a spirited battle with the No. 01 ESM car until his driver change to Franchitti midway through the second hour.

Pagenaud then took over point and remained up front until his final stop with 42 minutes to go, which gave the lead back to the polesitting car of Franchitti. However, a fuel-only stop for the Scot in the final 15 minutes saw him relinquish the top spot to the No. 551 car of Pagenaud, who cruised to the checkered flag.

“We had a pretty good strategy going in,” said Tucker who scored his 22nd career ALMS win. “The weather changed on us and we made a couple of good calls on the car. I was able to stay out for the full hour on rain tires and that gave us a bit of an advantage. Simon was able to get in and capitalize on that.

We ended up just doing our normal fuel stops. We were able to keep some pretty good pace and the guys had a good car for me. The strategy went as planned and the weather held out. All in all, it was a really good day for the Level 5 team, and really for the engineers and strategists."

Sunday’s flawless performance for the No. 551 car puts Tucker into the lead of the P2 championship, 4 points ahead of teammate Franchitti, who along with Gonzalez, recorded another double podium finish for the David Stone-led organization.

For Pagenaud, it marked the Frenchman’s first ALMS win of the season in his second start with the team, having filled in for fellow IZOD IndyCar Series star Ryan Briscoe, who is still recovering from a wrist injury sustained last month.

"It's good to be back in the American Le Mans Series and especially with such a great team in Level 5,” said Pagenaud, a former series champion. “It’s certainly a top team and is always a pleasure to work with them. We were able to compete in Sebring and we finished second there.

I was glad to be able to join Scott this weekend. I was here just to fill-in for Ryan and score as many points possible for Scott. I'm very happy with the win as this was the goal. It's not easy to jump from an IndyCar straight into the P2 car because it's a completely different skill set on the race track.

Traffic was a big key today. It was a pleasure to be here and I'm very happy for Scott to have scored all of the points necessary for the championship."

Having claimed pole position, fastest race lap and the race win, it was another perfect weekend for Level 5. All sights are now set on the next round of the ALMS at Baltimore, site of the team’s historic first overall 1-2 finish in series competition.

BAR1 back on the podium at Road America