Level 5 Motorsports is entering the sixth race of the season leading both the driver and team championships. Watch highlight video below. 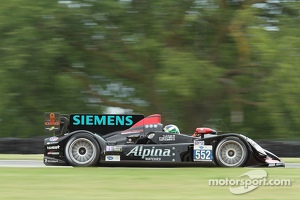 Entering the sixth race of the season leading both the driver and team championships, hopes were high for continued success this weekend at Level 5’s home track. The three-time and defending P2 champions unveiled a revised driver lineup earlier this week, with open-wheel and sportscar standout Pagenaud and newly crowned 24 Hours of Le Mans winner Ricardo Gonzalez rejoining the Level 5 team for this weekend’s 2-hour and 45-minute race.

Both drivers wasted little time getting up to speed in the pair of Michelin-shod prototypes. But it was a flying lap by full-season driver Franchitti set in the closing moments of the 15-minute qualifying session, that was good enough for the No. 552 car to claim pole for the second consecutive race. The Scot’s 1:54.806 lap time around the historic 4-mile circuit stood as the third quickest overall of the session and puts he and co-driver Gonzalez in prime position to fight for the win on Sunday.

"Our competition tested earlier in the week so we fell slightly behind when we arrived here," said Franchitti, who earned his 8th career ALMS pole and second with Level 5. "The car was okay yesterday but it wasn't quite there. The Level 5 engineering staff stayed really late last night burning the midnight oil and came up with some really great changes for us. We saw that on track today.

"I lost the dash during qualifying so I had no predictive and no idea of what times I was doing,” Franchitti added. “So I was just driving as hard as I could. It was a great run. Big thanks to the Level 5 guys. I'm excited to go racing tomorrow with Ricardo and hopefully we can get another 1-2 for Level 5."

Level 5’s No. 551 HPD of Pagenaud and nine-time national driving champion Tucker will roll off third on the grid, thanks to a 1:55.793 lap time set by the rapid Frenchman, who is subbing for fellow IZOD IndyCar Series star Ryan Briscoe. Both times were considerably quicker from Friday’s practice sessions, largely due to cooler track conditions.

“That was a heck of a lap by Marino and I’m happy for him and the team that we got the pole position,” said Level 5 team manager David Stone. “Obviously, we'd like to have locked out the front row but it didn't happen today. The overcast weather this morning was helpful. The difference in Marino and Simon in qualifying was how their tires came in and how each of them played that. It should be an interesting race having the four cars split like they are. We’ll just get into race mode.”

Level 5 and Tucker will be chasing their fifth P2 win of the season in the Orion Energy Systems 245. The race, from historic Road America in Elkhart Lake, Wis., is set for 3 p.m. ET on Sunday, August 11 with live coverage on ABC and ESPN3.