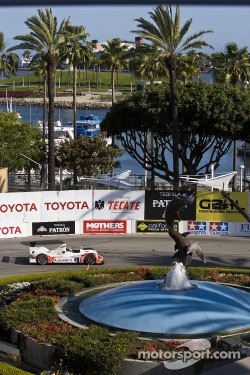 For the drivers of the American Le Mans Series, it was a race weekend that offered zero dry practice laps prior to taking the green flag for the two-hour sprint race.

Teams and drivers had a two-hour free practice session on Friday morning to learn the circuit and test set-ups. Unfortunately, it was under very wet conditions. For 22-year old Kyle Marcelli, he had no problems coming to grips with the circuit under the miserable conditions. Marcelli posted the fastest lap in the LMPC category which impressively was second fastest overall behind the Muscle Milk Honda LMP1 of Lucas Luhr and Klaus Graf.

“If you ask me, I rather enjoyed it.” Said the Canadian racer Kyle Marcelli. “I’ve driven many permanent road courses in wet conditions but never a temporary street circuit. The car was very good under braking and on turn-in, I suffered most just trying to get the power down as the car has no traction control.”

American Le Mans Series qualifying is divided into a fifteen minute qualifying session per class beginning with the GT cars and ending with the Prototypes. For the first time in a long time, ALMS qualifying was cancelled as mixed weather conditions provided a dry track for GT and a wet track for Prototype. Race officials made the right call as this would have inverted the grid making for an unsafe race.

According to the rulebook, the starting grid was then based off overall point standings. Unfortunately, for the #8 Merchant Services Racing LMPC driven by Kyle Marcelli and Anthony Downs, this meant a back of the grid starting spot as a DNF at the first round in Sebring, Florida left them with zero points.

Race strategy for the #8 Merchant Services Racing LMPC appointed Anthony Downs behind the wheel to start the race with Kyle Marcelli in to take the checkered. For Anthony, this marked his first time racing on a temporary street course and in the American Le Mans Series.

140,000 fans were on their feet as thirty-five of the world’s most exotic sports cars and prototypes roared down lakeshore to take the green flag. Downs was P8 in class but running strong and clocking consistent lap times close to the leaders pace. However, struggling with a lack of rear grip, Downs spun the car on the exit of turn six. Luckily avoiding the walls, Downs kept the car in the race but fell two laps down. Soon thereafter, it was about the forty-five minute mark in the two-hour race when the first and only caution came out. Merchant Services Racing as well as most teams utilized this caution to pit for a driver change. The team opted to take only fuel. Marcelli was now behind the wheel but two laps down. Racing out of the pits and back onto the circuit, Marcelli found himself positioned behind the LMPC class leader of Ryan Dalziel. Consistently clicking off fast laps, Marcelli past Dalziel getting one lap back then charged through to P4 in class. Everyone on the Merchant Services Racing team including Marcelli was praying for another caution which would allow them to hopefully get another lap back and challenge for a podium, however the race remained green until the end. The #8 Merchant Services Racing LMPC driven by Marcelli crossed the stripe P4 in class with the second fastest race lap.

“All in all, it was a good weekend for us in the #8. Although we don’t have any pretty hardware to show for it, we certainly proved to have winning pace. We’ll just have to put it all together in the next one.” Said Kyle Marcelli.