TAVARES, Fla. - Keen (Charleston, SC) is filling in for team regular Bill Sweedler (Westport, Conn.) whose business commitments will keep him out of the seat of the 458 for the next two events. Keen, 2009 and 2011 GRAND-AM GT Champion, is no stranger to the team having drove in the Ferrari at Sebring as well as winning the GTC championship last year with the AJR crew. 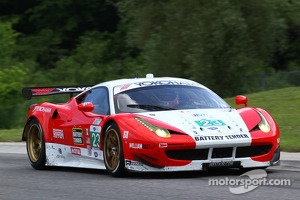 The 2.4-mile, 10-turn Mosport circuit is tailor-made for the Team West/AJR Ferrari. The undulating natural terrain road course located 40-minutes north of Toronto is a favorite of the drivers.

"I am so excited to get back in the Team West/ AJR Ferrari for Mosport," Keen said. "Mosport is truly one of the high speed, old school tracks in North America and after our successful test with Yokohama at Road Atlanta in June, I am expecting us to give the field some trouble.

The Ferrari is a great car and the high speed corners at Mosport will really suit it well. We will really get the car hooked up on the latest generation Yokohama tires. I am looking forward to a good race with Townsend and the AJR crew this weekend."

Bell will be running Mosport for only the second time in his career.

"This will be only my second time running at Mosport," Bell said. "The track has great history and is truly a historic sports car track. Mosport is similar in a lot of ways to Road Atlanta where we had a great test last month. I am hoping that a lot of what we learned at Road Atlanta, as well as at Lime Rock, will translate to having a really fast 458 around Mosport this weekend.

I am going to miss Bill, but having Leh in the car for the next two races gives us a different perspective on the car and one that I am looking forward to hearing. We will be the only Ferrari in the field this weekend,so that brings along a little pressure as well."

Eduardo Espindola, team co-owner, welcomes Keen back to the 458: "We welcome Leh back to the team this weekend," Espindola said. "The Risi car will not be at Mosport, so our Ferrari will have to step-up. I know that Townsend and Leh are excited to see what the car can do at Mosport and so am I!

Alex Job, team co-owner, is ready for the Mosport weekend: "The Ferrari 458 was made for a track like Mosport," Job said.

"The car is really balanced, now it is up to us to maximize the package on that great track. Leh is going to give us a fresh perspective behind the wheel that I think will make us that much better for the rest of the season. We miss Bill, but we know he will be watching."

The American Le Mans Series will travel to Canadian Tire Motorsport Park for the Grand Prix of Mosport, July 19-21. The race will be broadcast on July 21 stating at 1:00 pm EDT on ESPN 2. Live streaming will start July 21, at 11:45 am EDT on ESPN 3 with qualifying being streamed July 20 at 3:20 pm EDT on ESPN 3.

Mike Conway to drive for Level 5 Motorsport at Mosport