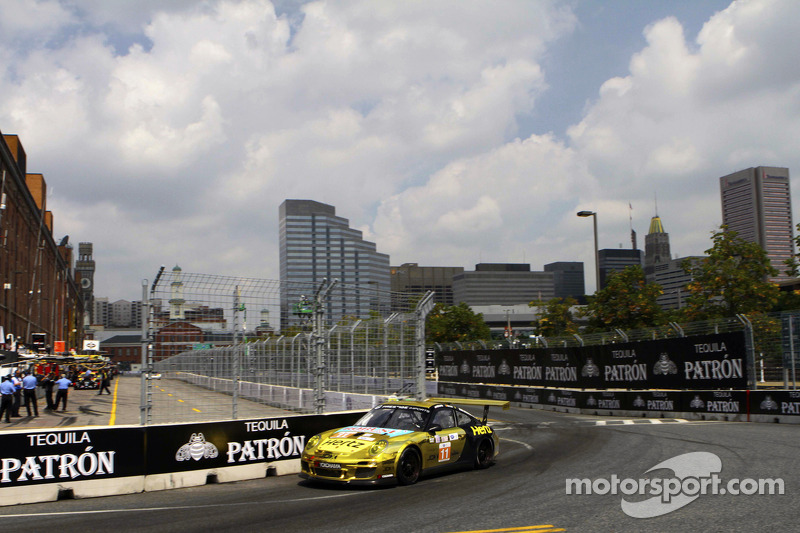 A seven car accident just seconds after the green flag flew resulted in a complete blockage of the front straight.

Loveland, CO – JDX Racing returned to the Charm City to claim their second podium finish of the season in what could only be described as a wild round seven of the American Le Mans Series. The #11 JDX Racing / Hertz Porsche carried momentum from round six at Road America and proved to the rest of the GTC Class that the all gold Porsche has the speed to compete for race wins. 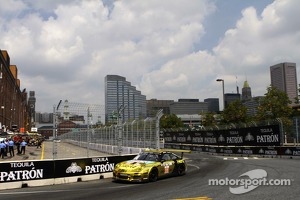 Mike Hedlund started what turned out to be one of the most bizarre races of the season. A seven car accident just seconds after the green flag flew resulted in a complete blockage of the front straight. The red flag came out which caused a 66 minute delay, as safety crews cleaned the wreckage and race control advised the race would be reduced to a 75 minute sprint.

Once the race went green another on track incident in turn four caused more chaos, and some heads up driving by Mike moved the JDX/Hertz Porsche up from its sixth starting position to third in the running order.

Mike Hedlund said, “What a crazy start to the race, it felt like I was in the drivers seat for almost two hours, but only got about 20 minutes of green. These Baltimore fans are true sports car racing enthusiasts, they loved the gold car, chanting HERTZ, HERTZ, HERTZ as we waited for the officials to clean the track after the massive pile-up. I was very lucky not to get collected before crossing the start/finish on the aborted start. The car was fast and I'm anxious to carry this pace into Austin in a few weeks".

Jan Heylen got behind the wheel of the #11 JDX Racing / Hertz Porsche during the team's one and only pit stop of the race, at around the 25 minute mark. Once Jan re-entered the street course, he made an all out assault on the other cars in class. Working through the bumpy two mile circuit, Jan quickly found his way into a fight for third position with the #30 car.

In a bold move at the turn three hairpin that would earn Jan the Battery Tender Hard Charger award, he was finally able to claim the position. Jan continued his attack on the next two cars in class, but with the shortened race length, ran short on time.

"I had amazing confidence with the car we had in Road America and we carried that momentum into Baltimore without a doubt. The crew did a great job preparing the #11 JDX Racing / Hertz Porsche. Nobody likes to see a race shortened, as we had plenty of car for the GTC class to handle the full distance.

Once the race went green, the team gave me a great stop and allowed me to get into a rhythm. We had a real opportunity to win the race today, but a podium position is a solid result and I'm really happy with the car and proud of the JDX / Hertz team", said Jan Heylen.

Harrison Brix, JDX Racing co-owner went on to say, “Following the warm up today, we knew we had the fastest car. The JDX Racing / Hertz Porsche was very compliant and the boys were driving with a lot of confidence. Mike did one heck of a job keeping the car clean and our driver/tire only stop was flawless.

Jan got held up for a good four laps and still had plenty of car, coming within inches of claiming second position. We are very happy with where we are with this car, the team did a great job getting this car race ready after Road America and we are confidently looking forward to Austin”

The next round the American Le Mans Series presented by Tequila Patrón will be at The Circuit of The Americas in Austin, Texas on Saturday, Sept 21st. Live coverage begins at 3:45PM EST Saturday, August 31st on ESPN3 and a televised broadcast on Sunday, September, 22nd at 1PM EST on ESPN2.

Paul Miller Racing No. 48 Porsche knocked out in race-start melee at the Baltimore Grand Prix

The end of an era and the beginning of a new one: Petit Le Mans 2013