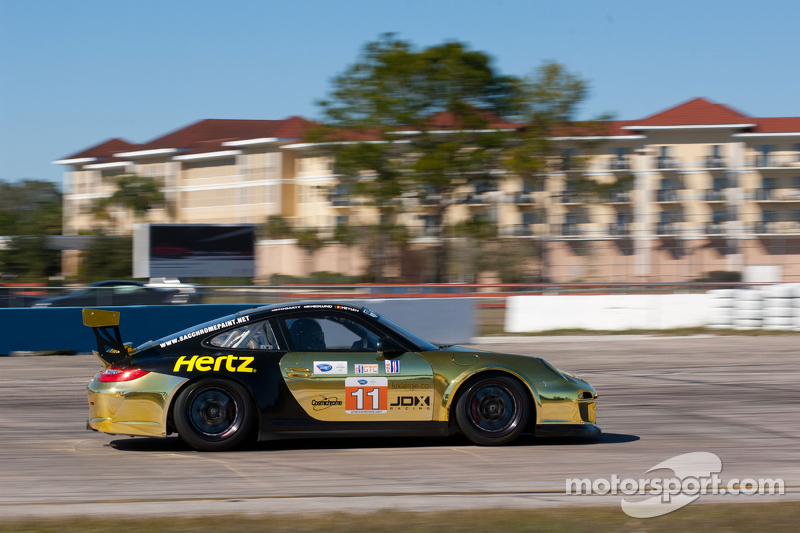 Loveland, CO – JDX Racing is proud to announce their return to American Le Mans Series competition for 2013 in the GT Challenge class, with returning sponsor Hertz and an all new driver lineup. 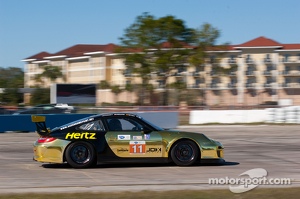 Coming off a strong sophomore season in the GTC class, including their first ALMS win at Mid-Ohio, JDX Racing has announced they will campaign the #11 JDX / Hertz Porsche GTC car for the complete 2013 ALMS season. Seasoned gentleman driver Mike Hedlund will anchor the driver roster with Belgian Jan Heylen joining Hedlund for the full 10 race campaign and veteran Jon Fogarty supporting at Sebring and Petit Le Mans.

Mike Hedlund hails from Woodside, CA and brings to JDX a strong foundation of endurance racing events, coupled with extensive experience driving Porsche GT3 Cup cars. Although 2013 represents Mike’s inaugural run in the Sebring 12 hour race, he has competed in multiple Rolex Series 24 hour races and captured a podium finish in the GTC class at the 2012 Petit Le Mans. Mike Hedlund commented, “I’m thrilled to be joining JDX for a full ALMS GTC season this year. These guys have put together a strong program and have continued to strengthen their presence in the ALMS. I couldn’t ask for two better teammates than Jan and Jon and I’m looking forward to showing what we can achieve in 2013”.

Jan Heylen brings to JDX an extensive racing background, including experience in Formula 3000, FIA GT3, Champ Car and Grand-Am. Jan made his Sebring 12 hour debut in 2012 as an 11th hour (literally) addition to Conquest Racing’s LMP2 effort, claiming a podium finish in his first try. Jan Heylen added, “I want to thank JDX and Mike for giving me this opportunity and I am very excited to be part of the team. I have total confidence in JDX and know we will be competitive everywhere we go. Everybody is here for one thing only, and that's to win! And that is no different for me”.

Jon Fogarty will drive in the endurance races with Mike and Jan. Jon is a two time Rolex Grand-Am Series Champion and a two time Atlantic Series Champion. Most recently Jon captured pole position and a race win in the inaugural Rolex Series event at Circuit of the Americas.

JDX is also pleased to announce that Hertz will return as primary sponsor for 2013. Having joined JDX mid season in 2012, this will be the first full year of Hertz sponsorship in ALMS with JDX Racing. The Partnership with Hertz displays their passion for success and motorsports as they have since introduced four new Porsche models into their rental fleet. “JDX had a strong 2012 season, winning their first ALMS race at Mid-Ohio and we’re excited JDX will campaign the #11 JDX/Hertz Porsche GTC for the complete 2013 season. With a new line up of avid, passionate drivers, we’re confident their skills and expertise will continue to impress throughout the year,” commented Hertz Chairman and Chief Executive Officer, Mark P. Frissora.

Team co-owner, Harrison Brix said “ We are excited to be back in the ALMS paddock this year and I believe that our new driver line up with Mike Hedlund, Jan Heylen and Jon Fogarty, is going to give our team plenty of time at the front of the GTC field. In addition, we are very proud that Hertz has committed to JDX Racing as our primary sponsor in 2013. Hertz recognizes the passion and enthusiasm of the American Le Mans series fan - and they understand the unique opportunity and importance of having access to these sports car racing enthusiasts”.

The green flag for Round 1 of the American Le Mans Series’ 2013 season flies at 10:30 am est on Saturday, March, 16th for the 61st running of the Mobil One Twelve Hours of Sebring fueled by Fresh from Florida.

BMW Team RLL ready for the 2013 Twelve Hours of Sebring