Klaus Graf and Lucas Luhr claiming the overall and LMP1 victory at the Orion Energy Systems 245, while Scott Tucker and Simon Pagenaud paired to win LMP2 for Level 5 Motorsports.

Honda Performance Development chassis and Honda engines continued their run of victories in the 2013 American Le Mans Series Sunday at Road America, with the Muscle Milk Pickett Racing duo of Klaus Graf and Lucas Luhr claiming the overall and LMP1 victory at the Orion Energy Systems 245, while Scott Tucker and Simon Pagenaud paired to win LMP2 for Level 5 Motorsports. 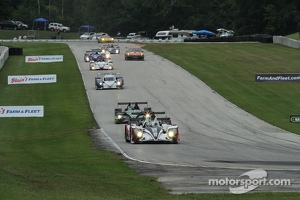 The overall win for Muscle Milk Pickett Racing was the fifth consecutive LMP1 victory for the team in six races this season, a streak that began at the Grand Prix of Long Beach in April. For Level 5 team owner/driver Tucker, his fourth class win of the season moved him to the top of the LMP2 driver’s championship over teammate Marino Franchitti, with four races remaining.

Light, but steady rain in the morning hours resulted in a wet racing surface when the two-hour, 45-minute contest began just after 2 p.m. local time. Starting from the pole, Luhr led the 33-car field throughout the first leg of the contest on rain tires, with conditions changing constantly as the 4.0-mile circuit gradually began to dry.

But the Muscle Milk Pickett team, its drivers and HPD ARX-03c Honda were up to the challenge. Luhr and Graf led throughout the day – except for routine pit-stop exchanges – despite a challenge from the Lola Mazda of Dyson Racing and the most competitive outing to date from the unique Delta Wing.

Both led at different times during the opening hour, but by the time the last round of pit stops for all three LMP1 contenders was complete, Graf was able to steadily build his advantage, and was holding a lead of more than 30 seconds when the yellow flag waved for a single-car GT category crash in Turn 1 that resulted in the race finishing under caution.

In the companion LMP2 category, it was another close-fought battle between the HPD ARX-03b Honda teams of Level 5 Motorsports and Extreme Speed Motorsports. Several pre-race decisions by the Level 5 team – including running pole qualifier Marino Franchitti and co-driver Ricardo Gonzalez on an alternate fuel strategy, and teaming Tucker with Honda IndyCar driver Simon Pagenaud – proved to be the difference.

In LMP2, Scott Sharp took the early class lead at the start for Extreme Speed after Gonzales spun without damage in Turn 3 on the opening lap, and dropped to third behind team leader Tucker. A two-stop pit strategy for the Tucker/Pagenaud Level 5 Honda resulted in the class lead being traded by the three contenders, while the second Extreme Speed HPD of Ed Brown and Johannes van Overbeek dropped out after 29 laps with an apparent mechanical failure.

The two-stop strategy proved decisive for Tucker and Pagenaud, but second place remained in dispute between Guy Cosmo and Franchitti as the pair ran nose-to-tail in the closing laps. With just 12 minutes remaining, Cosmo was the first to pit for a final splash of fuel. Franchitti was able to stay out for one additional lap, but a quick out-lap by Cosmo saw him sweep into second place as Franchitti exited pit lane. The final caution froze the positions, preventing any more drama in the closing laps.

The 2013 American Le Mans Series presented by Tequila Patron now heads to the East Coast for the August 31 Grand Prix of Baltimore, the final street-circuit event of the 2013 season, run in conjunction with the IZOD IndyCar Championship Series.

Lucas Luhr (#6 Muscle Milk Pickett Racing HPD ARX-03c Honda): 1st overall and in LMP1 with co-driver Klaus Graf; 5th consecutive win for Muscle Milk Pickett Racing and Honda in 2013: "Of course, conditions were very tricky at the start, and throughout the first hour as the circuit dried, but the team prepared a great car and it was very strong right from the beginning.

I just tried to maintain my speed and make no mistakes before handing over to Klaus [Graf]. This is turning out to be a very special year for all of us, but there still is a lot of racing remaining this season, and we have to keep up all of our efforts to continue this success.”

Simon Pagenaud (#551 Level 5 Motorsports HPD ARX-03b Honda): 1st in LMP2 with co-driver Scott Tucker: “It has been awhile since I’ve driven one of these cars [the 12 Hours of Sebring earlier this year, also with Level 5 Motorsports], and you don’t just jump in and go quickly straight away. But it always is a pleasure to work with Level 5, they are a top team and gave me a great car.

It was really fast; I just had to push. The car’s balance stayed the same throughout the race, even with the changing [track and weather] conditions. I was just here to replace Ryan [Briscoe, regular team driver sidelined with a broken wrist], but I was very happy to assist Scott [Tucker] in his championship effort.”

Steve Eriksen (Vice President and COO, Honda Performance Development): on Sunday’s double victory for HPD at Road America: “Congratulations to Muscle Milk Pickett Racing on another overall win this year, and to drivers Lucas Luhr and Klaus Graf, who continue to impress us with their speed and professionalism in the race today, especially early on, when it was very easy to make a mistake. Our LMP2 teams, Level 5 and Extreme Speed Motorsports, once again put on an exciting battle for class honors.

These teams are making LMP2 an exciting, season-long contest in 2013. Obviously, we are disappointed with the early retirement of the #02 Extreme Speed entry, and will thoroughly investigate the reason for the failure in an effort to ensure it does not happen again. Congratulations to Scott Tucker for his fourth victory of the year, and for the excellent strategic calls made by the team in today’s race.”

Dyson Racing is second on Round 6 at Road America