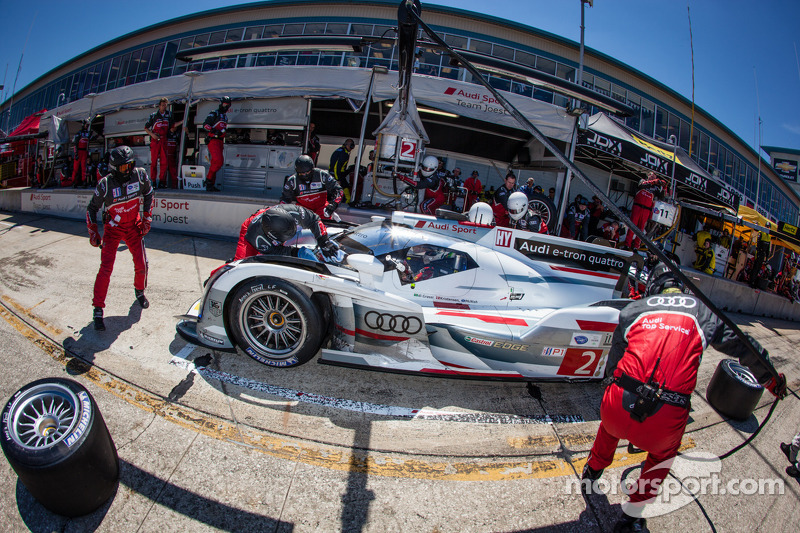 An Audi perspective at the end of the ALMS series.

By Tarek Ramchani Road Atlanta hosted the last ever race for the American Le Mans Series last weekend. Founded by Don Panoz in 1999, following the successful Petit Le Mans race in 1998, the ALMS changed the world of sportscar racing. Audi took part in this legendary series with great success and memorable moments.

The first ALMS race was the 12 Hours of Sebring in 1999. Audi was there, debuting in sports prototypes with the brand new Audi R8R. A fine third in the end for Audi Sport Team Joest, as they prepared for the Le Mans 24 Hours. It was a single appearance in the series that year, but things would change months later with a full North American assault. In 2000 Audi decided the enter the full ALMS season. Audi challenged BMW and Panoz with thrilling battles all year long. Wins came with the legendary Audi R8 and in the end it was Allan McNish who won the title.

A year later Audi again fielded two factory Audi R8 cars, joined by two privately run cars from Champion Racing and Johansson Motorsport (Arena). Great battles in house at Audi and against the strong Panoz team, Emanuele Pirro took the title in the end. 2002 was the final year for the Audi R8 with a factory effort, Tom Kristensen won the title at the season finale, his last ever full ALMS season. In 2003 the ALMS saw an epic battle between Team Joest and Champion Racing. Both were customer teams, thus it meant that they had equal chances. Breathtaking duels throughout the season with Frank Biela and Marco Werner crowned as champions for Team Joest in the end.

In 2004 only Champion Racing represented Audi in the ALMS. That was not a brilliant year for the LMP1 field, with low entries, but fans enjoyed great fights between the Champion Racing Audi R8 and the Lolas from Dyson Racing. Marco Werner and JJ Lehto were the 2004 series champions. 2005 was the final year for the all-conquering Audi R8. Again it was Champion Racing who represented Audi, with a two-car effort this time. Again battles raged between the Audis and the Lolas from Dyson Racing, with Frank Biela and Emanuele Pirro the series champions. For 2006 Audi introduced a revolutionary new weapon, the R10 TDI. The car won the ALMS opener at the 12 Hours of Sebring. The cars then headed back to Europe to prepare for Le Mans. Champion Racing, now a factory team under the Audi Sport North America banner, gave the R8 additional wins during the three ALMS events that followed on from Sebring. The farewell for the legendary Audi R8 was set at Lime Rock with a winning goodbye. The R10 TDI then returned to the ALMS and dominated the P1 field.

Audi had great battles with the Penske Racing Porsche RS Spyders from the LMP2 class, fighting for overall wins. Dindo Capello and Allan McNish were the series champions. That was the case again in 2007, with Acura joining Audi and Porsche. 2008 was the final year for Audi as a full season competitor in the ALMS. Titanic battles between the three brands for outright honors that year, with Marco Werner and Lucas Luhr crowned as the series champions for Audi. Petit Le Mans was a magical edition that year, when Audi beat Peugeot in style. At Laguna Seca Audi had three major moments, the last ever Audi race for Emanuele Pirro in LMP, the last ever race for the R10 TDI as a works team and the last ever race for Champion Racing. That ended a great era for Audi in North America.

The 2007-2008 seasons are still seen as some of the best periods in the American Le Mans Series. Since 2009 Audi only took part in the major endurance events, the 12 Hours of Sebring and Petit Le Mans. In 2009 Audi won at Sebring with the brand new R15 TDI, but they were beaten by Peugeot at a rain-shortened Petit Le Mans. Audi missed Sebring in 2010, but they did race at the Road Atlanta classic, again losing to Peugeot.

In 2011 Audi raced in both of the ALMS premier endurance events, with the R15++ at Sebring and the R18 TDI at Petit Le Mans, but again no victories. In 2012 the ALMS, and the newly formed FIA WEC, had a combined event at Sebring. Audi was victorious with the R18 TDI, the first win for the Four Rings in Florida since 2009. This year Audi returned to Sebring. Two factory R18 e-tron quattro cars were entered, preparing for Le Mans and to give a farewell to the ALMS. A fine 1-2 win in the end, a perfect result in front of huge amounts of Audi fans and sportscar enthusiasts.

Petit Le Mans 2013 was the last chapter in the history of the American Le Mans Series. Rebellion Racing, with their Lola-Toyota, took the outright win. In the past fifteen years the ALMS gave the fans some of the best sportscar battles in recent memory. There are no doubts that it was the ALMS that boosted sportscar racing, ahead of the European Le Mans Series and even the launch of the FIA World Endurance Championship. Now that the series has been merged with the Grand-Am Rolex Sports Car Series, creating a unified Tudor United SportsCar Championship, it's time to say goodbye to the American Le Mans Series and to thank Don Panoz for these fifteen years of memorable moments.