Chief Strategist Thomas Blam: "Both cars were in the mix over the course of the race, which given the circuit and the traffic is a serious endurance test for the cars and teams.

Sebring, Florida – The No 45 and No 44 Flying Lizard Motorsports Porsche 911 GT3 Cup cars finished the team's maiden race in the GTC class in second and ninth place in the 2013 Mobil 1 Twelve Hours of Sebring. No 45 drivers Nelson Canache Jr., Spencer Pumpelly, and Brian Wong drove a strong race, starting fourth on the grid and staying on the lead lap for the entire race. 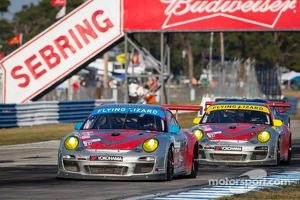 The unfortunate timing of a late race yellow erased a minute and a half lead, but in the following four stints the drivers and strategy kept the car at the front and moved the car from fourth back up to a podium second place. The No 44, driven by Pierre Ehret, Alexandre Imperatori, and Brett Sandberg, ran very well throughout the race, including leading in class, but was slowed by brake problems and a water leak late in the race after contact with a GT car, finishing six laps back of the class winner. "All of the drivers drove excellent stints and put us in a position to climb through the field and finish well," remarked Chief Strategist Thomas Blam, "Both cars were in the mix over the course of the race, which given the circuit and the traffic is a serious endurance test for the cars and teams.

The No 44 did run into some small issues which the drivers and crew managed well but had a cost in terms of finishing position. However the No 45 avoided trouble and raced extremely competitively, which is a good start to the 2013 championship effort here in the ALMS.

I'm very proud of the team as a whole - this change in class required a shift in some aspects of our approach and thinking and the crew has adapted quickly and effectively."

The team next takes to the track at the second round of the 2013 ALMS championship on the streets of Long Beach on April 19th and 20th. The team will again field two cars, the No 44 and No 45, with driver lineups to be announced within the coming weeks.

Henzler, Tandy, Sellers third in GT at 12 Hours of Sebring in Falken Porsche