Petit Le Mans Powered by Mazda gets the green flag at 11:30am ET on Saturday, October 19th.

Flying Lizard arrived at Road Atlanta this morning for the tenth and final round of the 2013 American Le Mans Series season at Road Atlanta, a 2.54 mile road course. The Petit Le Mans Powered by Mazda will run for 1000 miles or 10 hours, whichever comes first, and will serve to decide both the driver and team championships in the GTC class. 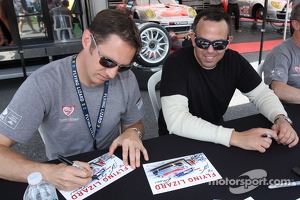 This race carries additional historical weight as it is the final American Le Mans Series race as the series merges with Grand-Am to form the TUDOR United SportsCar Championship for 2014, and also will see the final race for the GTC class as it joins Grand-Am Rolex GT to become the GT Daytona class for next season.

Entering the race weekend, Nelson Canache Jr. (Venezuela) and Spencer Pumpelly (United States) sit 3rd in the driver championship, 16 points behind Cooper MacNeil and Jeroen Bleekemolen and 3 points behind Henrique Cisneros. The Lizard duo has led the championship at various times this season but mechanical woes in the form of a holed radiator, failed fuel pump wiring harness, and broken fan drive belt in the previous three races has caused them to drop back in the points.

Nelson and Spencer will be joined in the Venezuela / eSilicon / UIS No 45 Porsche 911 GT3 Cup car by Madison Snow (United States), who is making his debut with the Flying Lizard team and is the 2011 and 2013 IMSA GT3 Cup Challenge champion, having locked up this year's championship at the most recent round at Circuit of the Americas.

The team currently leads the GTC team championship by 2 points, and the No 45 will be joined by its sister PR Newswire / eSilicon No 44, which will be driven by regular drivers Dion von Moltke (South Africa) and Seth Neiman (United States), as well as Brett Sandberg (United States), who drove the No 44 at the season's opening race, the Mobil 1 12 Hours of Sebring.

Madison Snow, Driver, No 45: "I'm very excited to run at Petit, as I have always loved endurance races and have just been able to start competing in them for the first time this season. I'm also really excited to be competing in this race with such an amazing team as Flying Lizard is. Their history speaks for itself and I know that with this driver lineup we have a great chance of doing well. With the championship points the way they are we have one goal – a win – and I can't wait to get on track."

Steve Conover, Chief Engineer: "The pressure is on to arrive at a good endurance race car setup for Road Atlanta. The car must be able to accept the turn 3 curbing and still have enough support for the compression in turn 12, which is very fast. Change of direction and good balance are the focus for this track, and it's going to be difficult to achieve that for all of the turns with the setup. It's definitely a bumpier track than Road America or VIR but not as bad as Mosport.

Plus tire life is a big issue, because turn 12 really abuses the inside edges of the rear tires as the car compresses and loads up. With the full race day worth of weather and temperature changes as we race past sunset the setup will need to be adaptable and hopefully fast for the run to the finish."