Mid-race penalty puts the no. 9 RSR /Johnson Controls Oreca FLM09 of Ende, Popow and Junquiera into catch-up mode throughout second half of 12 hour contest.

Sebring, Fla. - Duncan Ende's bid to get back on the podium at the Mobil 1 12 Hours of Sebring hit a major snag when his teammate, Alex Popow, hit a wayward LMP2 car approaching turn seven.

Keeping the American Le Mans Series' 'Penalty Box' official busy, the no. 9 RSR / Johnson Controls Oreca FLM09 was called to serve a stop and hold (sixty seconds) penalty which put the car a lap down to the leaders in the Prototype Challenge field. 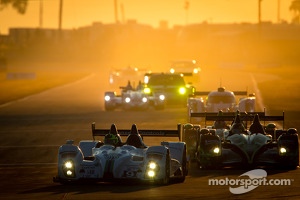 After qualifying in second place, Junquiera and Popow ran with the leaders before the car had to serve its penalty.

"We had a really strong race car - RSR Racing has a really solid program and the car was very fast and easy to drive throughout the race," said Ende. "It did get challenging towards the end of my stint when we double-stinted the set of tires.

We are still learning a bit about the new tire and in the heat of the day the rears definitely went away a bit at the end of a double-stint.

Unfortunately, we had a big penalty for contact with a car that was running massively off the pace, and we spent the rest of the race playing catch-up. No one is happy with fourth place when we clearly had a car that could have won."

Getting into the car in the middle stages of the race, Ende was a lap down and running in fifth position. Hoping to gain some time and potentially get a wave-by under a caution, the team elected to have Ende run a double-stint - keeping him in the car during a pit stop for fuel - but did not give him a new set of Continental tires, saving time during the stop.

Despite not getting a wave-by during a full course caution, the RSR Racing team was able to make up ground on the leaders until it lost tie in the pits when forced to change the nose of its Oreca FLM09 to repair damage to the louvers above the front wheels. The team made up one position as the car took the checkered flag in fourth position, one lap behind the leaders.

"I loved working with Bruno and Alex - it is much more fun to drive with them, rather than against them," said Ende. "Everyone at RSR Racing was really great as well, it's a class team and they made me feel right at home. I hope to have the opportunity to race with them again and maybe we can get the result we should have had this weekend."

Ende will start his regular job for this season at this weekend's St. Petersburg Sports Car Challenge in St. Petersburg, Fla. In the season-opening event for the Pirelli World Challenge GT class, Ende will drive the no. 24 GMG Audi R8 LMS.

More from
RSR Racing
IMSA Others