Elkhart Lake, WI - It was another classic Road America race. Four hours of racing produced the closest ever finish in American Le Mans Series history: Guy Smith won over Lucas Luhr by 0.083 of a second. 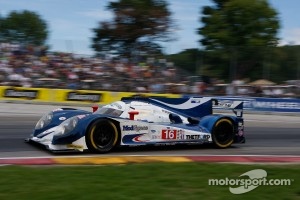 The #20 Dyson Racing entry of Michael Marsal, Eric Lux and Tony Burgess bookended the second place Muscle Milk car with a third place finish, less than a minute behind at the end.

At a track known for close finishes, this was one for the books. The #16 Mazda-powered Thetford/ModSpace entry led 54 laps of the 101 lap race. The last caution period ended on lap 90 with Luhr fourteen seconds back from Smith. On lap 100 the margin was half a second.

Smith recounted that "at the final corner of the last lap, Lucas was all over me. He made a good move and he just came off the brakes and rolled past me. But I knew if I over slowed the car Click for More Hi-Res and got back inside, I would be able to sling shot past him and race him up the hill to the start finish line."

Last year was also a record close finish: the same two cars, but it was Smith ending up second from Klaus Graf in the Muscle Milk car by 0.112.

Chris Dyson drove the first two and half hours in the #16 car. He started from the back of the grid after mechanical problems prevented the car from qualifying. He moved from 35th to second in the first nine laps and then assumed the lead when the Muscle Milk car encountered a water leak. "The car had the best balance we had all weekend and the Dunlop tires and Mazda engine were great," Dyson said.

"We built an advantage when their car had its problems, but we never counted Greg Picket 's guys out. We had a three-lap lead at Lime Rock and then Guy got a puncture and we lost it. It was like having a big first inning in baseball, and we had to see it through to the end even as they were catching breaks and clawing back the deficit. Guy was able to keep his pace and composure under heavy pressure and bring it home. It was an absolutely brilliant piece of driving."

The #20 Dyson Racing entry spent a good part of the race in the top-three including a period as the overall P1 leader. "There was one caution too many, otherwise it would have been a one-two Dyson finish," said Michael Marsal. "Tony drove a great first stint and Eric did his usual skillful job."

Eric Lux replied that, "Mike had the best race he has had all season. We were trying to give Dyson Racing a one- two finish but the last caution allowed Muscle Milk the wave-by and they were able to get by in the last few minutes." Tony Burgess commented that the more he drives the car, the more he likes it. "This is the first time I drove it with full tanks in race conditions and it is a wonderful car. I had a good time in the car.

It was a little hairy at the start with cars being overly aggressive, but as soon as I got some clean track, I could easily reel them in and pass them." Today's run adds to the #20 car's record of finishing on the podium in every race it has run this year.

Chris Dyson went on to comment, "I have always wanted to win this race since I first came here as a little boy. It was 25 years ago when we won here in 1987 with Price Cobb and Johnny Dumfries and it was one of the highlights of my childhood standing on the podium with my dad and celebrating with the team.

Labor Day weekend will see the American Le Mans Series sharing the streets of Baltimore with IndyCar. The ALMS race will run on Saturday, September 1st at 4:30 PM ET.

Dyson Racing Team concludes two-year of works-supported program with Bentley, looks ahead to 2016