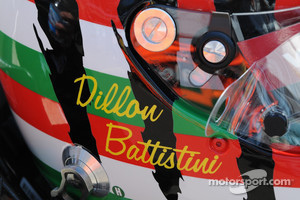 POUGHKEEPSIE, NY May 2, 2012 - Accomplished open-wheel race car driver, Dillon Battistini, added to his successful resume with a recent test at Sebring in Dyson Racing's Lola 12/66- Mazda. "He did 40 laps across a series of varying conditions, so he could see the way the car changed and so we could judge his feedback. We were all very impressed with his pace and methodical approach," noted Chris Dyson, Vice President of Dyson Racing and reigning ALMS champion.

Dillon enjoyed the opportunity to experience a top-line prototype race car. "I met Guy Smith at the IndyCar event at Long Beach last year," recounted Battistini. "It was the first time I had seen him since I raced him in go-karts in 1991. He said he thought I would love sports cars and I decided I would give it a try. I spoke to Chris Dyson and when he offered me the chance to try the team's new LMP1 Lola at Sebring, I jumped at the opportunity. I was really impressed with the car's performance. The acceleration and downforce were impressive and the carbon brakes were phenomenal. I very much enjoyed driving it and it was a pleasure to work with such a professional team. I think that endurance racing is entering an exciting period, particularly with the reintroduction of the World Endurance Championship and the various manufactures coming in. I am looking at my options to do some sports car races in addition to the IndyCar program I am working on for later this year."

Born and raised in the UK with an Italian father and a British mother, Dillon built his competitive foundation on championships in British go-kart series, racing and winning against England's best including Jenson Button, Darren Manning and Justin Wilson. He moved up to Asian Formula 3, racing in China, Indonesia, Australia, and the Philippines, becoming the Asian Formula 3 champion in 2007 with five wins and ten podium finishes. After a successful Champ Car test with Minardi Team USA, he moved to the US and competed in the Indy Lights Series in 2008, winning his first race (on his first ever oval track) and three more races in his rookie year, including the series' signature event, the Indy 100 at the Indianapolis 500. He became the test driver for Panther Racing's National Guard/Delphi IndyCar and continued in Indy Lights for two more years, making his IndyCar race debut with Conquest Racing at Kentucky last year.

Chris Dyson and Guy Smith will be back in the #16 Lola Mazda coupe at Mazda Raceway Laguna Seca for the third race of the American Le Mans Series on Saturday, May 12. Joining them in the six-hour enduro will be British driver Johnny Mowlem. At last year's September ModSpace Monterey race, Dyson Racing wrapped up four championships: the ALMS Drivers Championship with Chris and Guy, the Team Championship, the Engine Championship with Mazda and the Tire Championship with Dunlop.