March 13, 2013 (Sebring, Fla.) - With a full season of racing in the Pirelli World Challenge already planned, Duncan Ende, from Los Angeles, California, traveled down to Florida two weeks before he needed to be there for the season opening St. Petersburg Sports Car Challenge. His plan was to go to Sebring, see friends, and enjoy spectating at the 61st Mobil 1 12 Hours of Sebring Presented by Fresh from Florida. 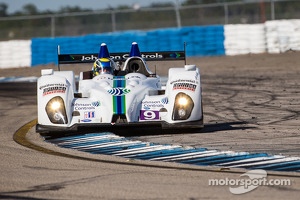 Luckily for him he had his helmet and driving gear, as it turns out he won't be enjoying the sights and sounds of the race as a spectator - but as a driver in the No. 9 RSR Racing / Johnson Controls Oreca FLM 09 Prototype Challenge that will compete in the Prototype Challenge class.

"I didn't expect to have the chance to race at Sebring, so I'm really grateful to everyone at RSR Racing for helping to make this happen so late in the game," said Ende. "I was just hoping to see some friends, maybe enjoy some Tequila Patron, and watch the race with my wife. But racing is much better."

In what will be his fourth Mobil 1 12 Hours of Sebring, Ende will join Bruno Junquiera and Alex Popow, whom he competed against during the 2012 American Le Mans Series season. In three previous attempts at Sebring, Ende finished second in GT-C in 2011, while he ran in a podium position in the Dempsey Racing Prototype Challenge car last season before losing laps with electrical problems.

"I learned a few things about Bruno and Alex as we raced against them last year," said Ende. "Both of them are very quick and have a very good understanding of how to get the most out of the Prototype Challenge car. It isn't the easiest car to drive or set up for, but the RSR Racing guys have shown they know how to get the most out of it. The change to the Continental Tires should level the playing field a little bit, but I'm confident this will be a fast car. I'm really looking forward to the race."

Much as it was last season, the level of competition in the Prototype Challenge class at Sebring is at a very high level. But, that's what Ende has come to expect and what's kept him excited about the class.

"Look at the entry list for the PC class and there are a lot of standout names," said Ende. "And the Pro-Am nature of the class and the drive time rules means that each driver has to contribute a lot if the car will have a chance to win. We have a solid lineup and a very capable crew at RSR Racing and if we can just stay out of trouble for the first few hours, we should have a real good chance to win."