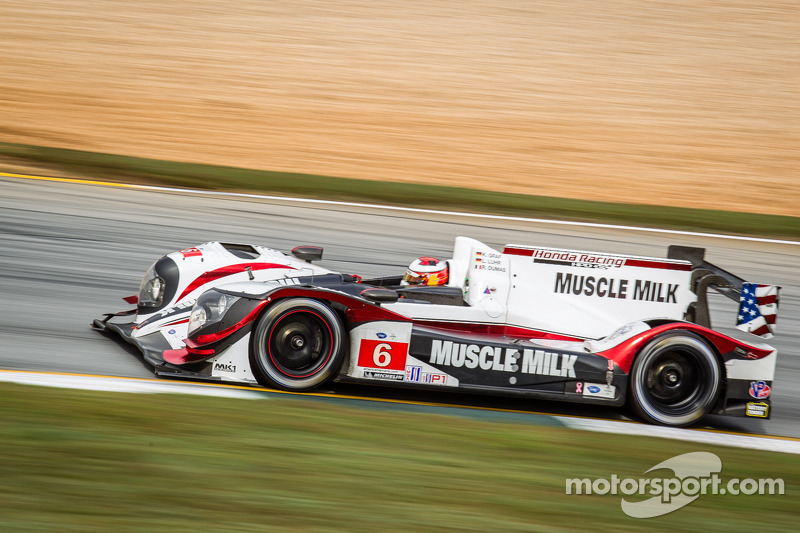 Braselton, GA (October 19, 2013) - After claiming eight wins in a row this season, out of 10 races, the Muscle Milk Pickett Racing team saw their final event of 2013 come to an early end on Saturday during the Petit Le Mans. 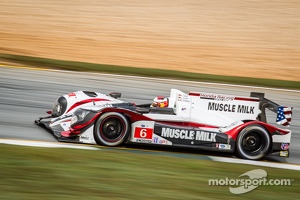 The team was forced to retire from a one-lap lead due to an overheating problem on their Muscle Milk HPD ARX-03c. The last time the team had faced a race-ending issue was at Sebring in 2012.

After starting from second place on what was a wet Road Atlanta track, the team picked up the lead early on in the 1000-mile/10-hour race.

The Muscle Milk squad went on to exchange the top spot in the race with Rebellion Racing a couple of times before taking a two-lap lead following pit stops and a penalty to the European-based sportscar team.

The early part of the race was one against Mother Nature as the team had to switch back and forth between Michelin rain and slick tires a few times, but the strategy was the right one as the team maintained their lead heading into the halfway mark.

It was once they reached the midway point of the 1000-mile race, that Romain Dumas, who was now aboard the Muscle Milk HPD ARX-03c, was called into pit lane due to an overheating problem.

The team was sadly forced to retire and call it a day.

Despite the disappointing end to the season, Muscle Milk Pickett Racing had a wonderful final year in the American Le Mans Series with eight wins in a row and five pole positions which allowed them to clinch their second consecutive Championship earlier this year.

Muscle Milk Pickett Racing will announce their 2014 plans in the coming weeks.

Klaus Graf, driver #6 Muscle Milk Pickett Racing "Tough end to a great season, not quite the finish we wanted at the Petit Le Mans but we had a very good lead and we did the right strategy, especially in difficult conditions and the Muscle Milk guys did an awesome job in the pits. "It wasn't an easy race and then we were forced to stop running due to our overheating problem but we showed our strength in speed and in difficult conditions. "We won a lot of races with our Muscle Milk HPD car and we should not forget that. We won 14 races in two years with this car, that's a lot out of 20 events. "It's the end of the ALMS but we look forward to the future. We have a strong team and we can't wait until next year."

Lucas Luhr HeadshotLucas Luhr - driver #6 Muscle Milk HPD ARX-03c "It's a very disappointing way to end the season, especially since last year at Virginia, we've finished every lap, and to have something happen like this at the end of the year and the last race of the ALMS, it's sad. Not just for us, but for the Muscle Milk crew and everyone associated with the team. "On the other hand you have to see the bright side, there are 10 races in the Championship and we won eight, and that is very outstanding for everybody involved with Muscle Milk Pickett Racing. Everyone can be really proud of what we have achieved these last few years and I think we need to end the season with that thought, not the thought that we didn't finish the race."

Romain Dumas headshot Romain Dumas - driver #6 Muscle Milk HPD ARX-03c "It's not a great way to end the season. We knew it would be difficult before the start but we kept getting better and better as the race went by. We had the advantage in the rain and then even in the dry we were doing really well and pulling away until we had the overheating problem. We still had four hours to go so it's very difficult to predict what could have happened but it was a good race, very close with Rebellion. "Unfortunately, it's a shame it had to end this way. It would have been better to fight until the end for the win. "I want to thank Greg and Penny Pickett for allowing me to drive for them this year. They are a great team to drive for and I truly enjoyed the experience."