SEBRING, FL. – DeltaWing Racing Cars took a car that, one month ago, had no engine, no tires and no crew and put it on the track for its LMP1 class debut in the American Le Mans Series at this year’s Mobil 1 Twelve Hours of Sebring Fueled by “Fresh from Florida.”

Unfortunately, despite a week’s worth of learning, progress and development on the DeltaWing powered by Élan, now running on Bridgestone tires, the car retired with terminal engine failure in the second hour of the race. 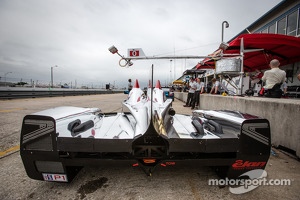 “There was a gremlin we didn’t recognize,” said Dr. Don Panoz, managing partner, DeltaWing Racing Cars. “Time caught up with us. It happens.

Our first year here, with the Panoz GTR-1, it set the track record, and then eight minutes into the race it blows the electronics. These things happen. The guys have done a great job.”

Until that point, the DeltaWing had made steady improvements on a daily basis throughout its week at Sebring International Raceway.

The crew arrived on Saturday and used each day as an opportunity to further develop the car, which had tested only for two days at Road Atlanta in March since it finished fifth overall at last year’s Petit Le Mans.

By the Saturday morning warm-up, the team was confident it had made further strides to the car and could run a competitive pace with increased reliability. As the last on-track session before the race, the DeltaWing was well-placed heading into the 12-hour race.

“I think I’ve been encouraged by the progress we’ve made,” said team boss, David Price. “When we’d left the shop, we’d only done a handful of laps at Road Atlanta.

But we’ve chipped away all week. Our track time has increased as the days have gone. Until the warm-up, when I thought we were in good shape, the car was good and handling well. I was devastated it failed so early in the race.

I expected some difficulties given it’s a 12-hour race, but I wasn’t expecting it so disastrously, so soon.”

Price, though, reflected on the team being able to come together, produce a new engine for the DeltaWing’s rear frame, and get on track for one of the marquee endurance sports car races in the world.

“I think they have done a sterling job,” said Price. “That’s what Don has brought me in to do, was bring it all together in a short time. The car sat and did nothing after Petit until one month ago.

We’ve had to install a new engine within the confines of the current rear crash structure. That’s made it difficult with the engine being a bit bigger; it’s not as straightforward as just installing a new engine. It just takes the time for some of these parts to come together.”

Drivers Meyrick and Pla were able to provide the feedback from the week, and joined in offering effusive praise of the effort for the team to get to Sebring.

“Everybody on the team has put in a very good effort – the crew, the engine guys, the whole team – it’s been very impressive,” said Meyrick.

“Going into this week, in all honesty, we didn’t know what the car was going to do here. Sebring is notoriously difficult in terms of handling, the bumps, how hard it is on the car for bottoming.

We didn’t know how it would pan out. It has been tough. We have made a lot of progress. We now have a lot more data and information on the car and the Bridgestones to be strong.

As with any tire, there will be tweaking. With the engine, again, it’s a typical development program. When it runs, it’s strong.”

Pla agreed with Meyrick’s assessment, and explained what it has been like to drive the revolutionary prototype that is built on the principles of running at half the weight, half the drag, half the power and with half the tire consumption as a standard prototype.

“It is a very unique car,” said Pla. “Looking at the shape, it’s so different than any other LMP cars. It was a completely different feeling to drive. It was a very good experience.

There is still a lot to do to make the car quicker and easier to drive. The potential is huge, and we have a starting point now.”

As much as the car was developed this week, so too were the Bridgestone tires. Al Speyer, executive director of motorsports, Bridgestone Americas, noted that in less than two months the company went from having molds of tires to actual sets and compounds for use for the DeltaWing.

“It was actually late January that I found out; I thought we would be talking about a 2014 project,” said Speyer. “We had molds and equipment, and had done some laboratory testing, but we had never put the tire on a car on a track. This is not the debut we wanted, but it leaves plenty of optimism for the future.”

The DeltaWing will race at Mazda Raceway Laguna Seca in May, with further details about the team's effort there to follow at a later date.