Petit Le Mans is not only the final round of the 2013 ALMS season but also the series finale as well. The 1,000-mile/10-hour endurance classic has been a highlight event on the ALMS tour since the inaugural running in 1998 and will continue as a premier race event in next year’s inaugural IMSA TUDOR SportsCar Championship season.

“It was definitely a priority to get back to two cars this year,” Dempsey said. “Getting Charlie and Charles with us is great, they are family, and we are looking forward to having Darren join the team too.” 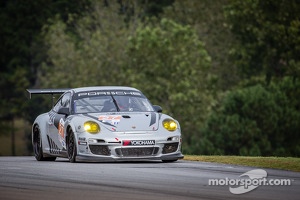 Both Dempsey Racing entries and all six drivers were able to participate in unofficial testing this week at Road Atlanta that concluded today. Dempsey himself even took advantage of Monday’s session before returning to Hollywood to work on the set of Grey’s Anatomy before a scheduled return to Road Atlanta on Thursday.

“I have had a little bit more time to test here than last year,” Dempsey said. “Having the Monday test was great. I got in about 50 laps in the morning alone and that really helped with the conditioning, just working on the line and improving. I picked up a lot of time and I am feeling pretty positive for the weekend, Joe is back in the car, and he always drives well. Hopefully we have a good run and have a great result.”

Dempsey is on the brink of completing his first full season since he started racing in professional sports car categories nearly a decade ago. The majority of those races have been in GT categories, including this season in the ALMS GT Challenge (GTC) class, but he and Foster joined Dane Cameron in the P2 category for Dempsey Racing’s Petit debut last year in a Judd-Lola.

This season Dempsey has partnered with top talent Andy Lally for the full GTC championship, but Foster filled in for Lally at Long Beach and joined the No. 27 regulars as the third driver at Long Beach.

“Coming into the final weekend of the season, we are looking good and feeling optimistic,” Lally said. “Road Atlanta is my home track and I am stoked to have what is arguably the biggest race of the year here. I think we have a good chance, especially with Joe Foster back onboard as our third this weekend, to not only podium but look for the top of the podium.”

Dempsey and Lally finished third two races ago at Circuit of The Americas in Texas and earned their first podium of the year with a second-place finish at Mazda Raceway Laguna Seca in May. The Laguna race marked the last time Dempsey Racing fielded two Porsches but they are back to full strength this weekend with returning friends and teammates Putman and Espenlaub and debuting team driver Law.

“It’s really a family thing here,” Espenlaub said. “When we first walked into the team transporter on Monday for testing it was kind of like a family reunion at Thanksgiving or something. You get a smile on your face right away, it is great to see everybody, and they welcomed us back just like it was yesterday. It is great to be back with the Dempsey boys and all of our old friends.”

Espenlaub has driven for Dempsey Racing since the team’s inception and was part of the group’s GT debut with Dempsey and Foster in the 2007 season-ending GRAND-AM Rolex Sports Car Series race at Miller Motorsports Park in Utah. More recently, Espenlaub co-drove the entire 2012 season with longtime teammate Putman in a sister GT entry alongside Dempsey and Foster. Putman makes his Petit Le Mans debut this weekend.

“I have participated in support races at Petit, in fact, one was the first pro race I ever did,” Putman said. “It was about 12 years ago in the Panoz Pro GT Series where I met both Joe and Charles. Years later I ran several World Challenge races in support of Petit, so I have seen it a number of times through the years. It is kind of cool to finally get to drive it, the last one in ALMS, and it is great to be back with Joe, Charles and Patrick and get the whole band back together at Dempsey Racing. The group kind of started here so it is cool that we are here back together doing it.”

Law brings a race and championship-winning resume to the No. 10 team, including an overall victory in the 2009 Rolex 24 At Daytona in a Porsche-powered Riley Daytona Prototype.

"It's great to come on board with this program,” Law said. “Dempsey Racing has really built a competitive program over the last few seasons. It will be fun driving with Charles Espenlaub, as I have known him for a long time and we have worked together, as well. He and Charlie Putman have also been driving together for quite a while and have had great results over the years."

After testing Sunday, Monday and today at Road Atlanta, the official Petit Le Mans schedule begins tomorrow, Thursday, October 17, with morning, afternoon and nighttime practice sessions. Final practice Friday morning will be followed by GTC qualifying that afternoon at 1:45 p.m. Race-day Saturday begins with a final warm-up practice at 9:15 a.m. EDT before the scheduled start of the Petit Le Mans at 11:30 a.m. EDT.

Sweedler, Keen and Mowlem in for last ALMS Petit Le Mans in Ferrari