While the No. 27 will grid on the inside of the second row for tomorrow’s 1,000-mile/10-hour race, the returning Dempsey Racing No. 10 PRS Guitars Porsche of Charlie Putman, Charles Espenlaub and Darren Law will roll off from the inside of row four after Espenlaub qualified seventh.

Petit Le Mans is the final round of the 2013 season and also the ALMS series finale. The race has been a highlight event on the ALMS tour since debuting in 1998 and will continue as a showcase event in next year’s inaugural IMSA TUDOR SportsCar Championship season. 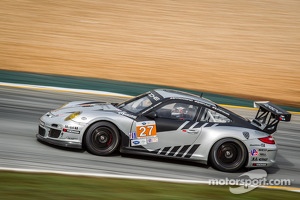 “We are starting P3, it is a good solid field here and we have had a good solid car,” Lally said. “We have been in the top three in most of the practice sessions, and the best part about this weekend so far is that Joe and Patrick are also really fast. We have got one of the best driver lineups in the field, hands down, right now.”

Dempsey has co-driven with Lally in this year’s full GTC championship but Foster filled in for Lally at Long Beach and joined the No. 27 duo as the third driver at the season-opening Sebring race.

“We have had a great week, the pace has been strong all week, the car has been great and we have had a little bit of everything taking us into this race,” Dempsey said. “We will be alright in the wet if it rains, in the dry the car is really good, Andy has been solid, Joe has been solid, and the pace has been consistent. We just need to be really spot on with the strategy, be consistent on the track, stay out of trouble, not make any mistakes, and I think we have a good shot at it at the end.”

The No. 10 entry is returning to the Dempsey Racing stable for the first time since the Mazda Raceway Laguna Seca event last May. Putman and Espenlaub are more than familiar to Dempsey Racing and drove a second GT entry alongside the car of Dempsey and Foster in the full 2012 GRAND-AM Rolex Sports Car Series season.

“Actually, we have a much better car than we showed in qualifying,” Espenlaub said. “We had a throttle and brake issue that emerged its head again, and that is the least amount of fun that I have ever had driving a race car. We have been working at it steady all week and this is just one more little problem to overcome. Hopefully, this will be the last of it for the weekend and we will have a good race.”

Although Putman and Espenlaub are returning to Dempsey Racing this weekend, they have joined Foster in racing Porsche 911 GT3 R cars in Europe this summer. The “Cup” specification GT3 they are racing this weekend was comfortable right away.

“The car really feels normal to us,” Putman said. “One of the beautiful things about the Porsche is that the switch panels, steering and controls are all fairly well standardize, its super, so the car feels just like the Porsches we were running in Europe and in a couple of Rolex Series races this year. It is sort of familiar now, getting into it, so that is a big step up and a real positive coming in here and jumping into the car.”

Law is making his Dempsey Racing debut partnering with Putman and Espenlaub but has more laps in Porsche 911 GT3s in the Petit Le Mans than any of his teammates.

"I have done a lot of laps here in Porsches and this is 10 hours,” Law said. “Qualifying is important but it’s not critical to the finish of the race. Unfortunately for us, this is a new car coming back with a new group of guys, and it is a second car that hasn’t been run most of the season. So, we’re working through a couple of things and all in all Charles did a great job in qualifying. We are not that far out and I feel pretty confident heading into this thing.”

Race-day Saturday begins with a final warm-up practice at 9:15 a.m. EDT before the scheduled start of the Petit Le Mans at 11:30 a.m. EDT.

“We are going to have a competitive day tomorrow and just try to stay out of the ongoing Petit Le Mans trouble that is always lurking,” Lally said. “If we just stay safe, stay smart and stay fast we are going to be there for quite a dogfight at the end.”