Team looks forward to restarting the ALMS season with their first appearance at the historic New England track. 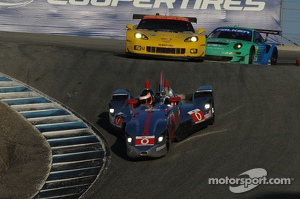 For the first time in the car’s dramatic history, both drivers come into the weekend with experience behind the wheel in race conditions. That said, neither Katherine Legge nor Andy Meyrick has driven at the narrow, seven-turn Lime Rock track before – which at 1.5 miles, is the shortest track on the ALMS schedule.

Legge and Meyrick are naturally anxious to get back into the car after a nearly two-month hiatus, designed by the series to allow participants the chance to race in the 24 Hours of Le Mans. Both drivers know that learning the track amidst the dissimilar speeds produced by the different classes of race car will make for an interesting weekend.

“Learning it should be fun,” said Meyrick. “It looks like an awesome little track, very tight, twisty and challenging which will make for great racing, I am sure. Traffic will be very difficult; it’s very short and narrow but that’s sports car racing and that’s why we love it.”

“You really have to be switched on, because there won’t be a moment to rest,” agrees Legge. “You’re always going to be working, planning and overtaking. It’s the same for the team; they’ll have to be switched on with the calls that they make with fuel mileage and strategy. It makes it a little trickier.

Everywhere is different, but that’s what’s so cool about ALMS, they go to so many really great American circuits. I’ve never been there before and I’m really looking forward to getting to that part of the country and to experience Lime Rock.”

Both drivers have laid down their share of miles in the weeks since Monterey – Meyrick, in the Blancpain series in Europe and Legge, who finished 26th in the Indianapolis 500. But the emphasis is now on the DeltaWing and the ALMS series, with six races on the team’s schedule between now and the season finale in October.

“The plan is to continue making progress,” said Meyrick. “The team, Élan and Bridgestone did an incredible job between Sebring and Laguna but we need the same sort of step again. This is the first time that the DeltaWing will run at Lime Rock so we need to work on a good setup and balance for the car and then I am sure we can have a strong race.”

“It was good to get back into the car after having driven the IndyCar, to get the skills back to the DeltaWing style of driving,” said Legge (referring to last week’s test session at Road Atlanta). “We really are still a development program, so we’ll look to make another leap forward at Lime Rock and work on the rest of the year.”

The DeltaWing embodies a new era of eco-friendly technological advancement, with nearly half the weight, aerodynamic drag, horsepower and fuel consumption of its competitors. Last year, Popular Science magazine awarded the DeltaWing a spot on its "2012 Best of What's New" list and Automobile magazine named it the 2013 “Racing Car of the Year.”

The American Le Mans Northeast Grand Prix from Lime Rock Park in Lakeville, CT is set for 3 p.m. ET on Saturday, July 6, with live coverage on ESPN2 and ESPN3.