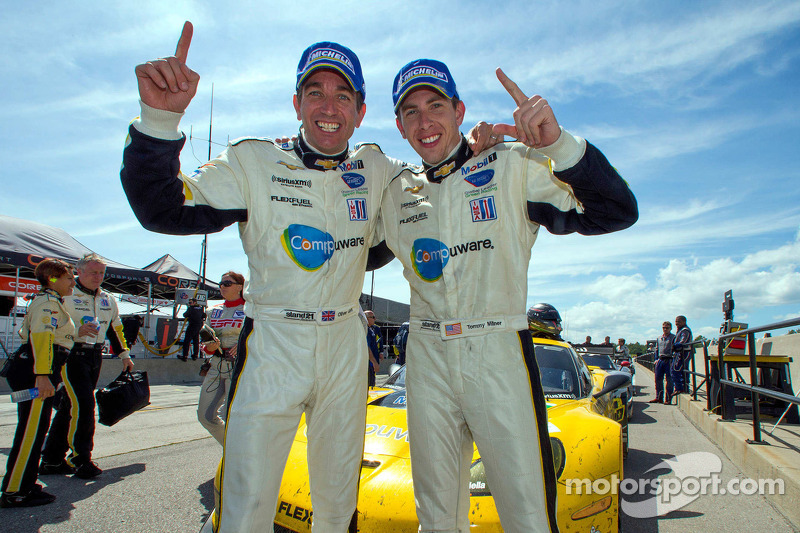 BOWMANVILLE, Ontario, Canada (July 21, 2013) – The track name and surrounding facilities may have changed dramatically, but the excitement that has long been a hallmark of American Le Mans Series presented by Tequila Patrón races at Canadian Tire Motorsport Park remained in Sunday’s Mobil 1 SportsCar Grand Prix.

The 2.459-mile, 10-turn Canadian road circuit played host to an epic battle of American muscle in the GT class, while the battle for supremacy in the P2 category remained close throughout two hours and 45 minutes on a gorgeous midsummer afternoon.

In the end, reigning ALMS GT champions Tommy Milner and Oliver Gavin claimed a narrow GT class victory in the No. 4 Compuware Chevrolet Corvette C6 ZR1 ahead of Dominik Farnbacher and Marc Goossens in the No. 91 SRT Motorsports SRT Viper GTS-R.

Milner had his mirrors full of Farnbacher’s silver Viper throughout the closing minutes, but held on to win by a scant 0.267 seconds. It was the 10th victory at Canadian Tire Motorsport Park for Corvette Racing.

“I had to do whatever I could do to hold him off without getting a penalty,” said Milner. “Our car wasn’t quite as good as theirs. He could really close the gap in Turn 8.

“I told myself going into Turn 8 on that last lap that I was either going to spin myself out or it was going to stick and I was going to keep the lead. I threw it in there and I here I am.”

Franchitti passed Tucker – who drove Level 5 Motorsports’ No. 552 entry to the checkered flag after starting the race in the No. 551 – with 26 minutes remaining to earn the P2 class victory and second overall.

Extreme Speed Motorsports driver Scott Sharp also drove the No. 01 machine past Tucker in the final laps of the race and finished second, right on the gearbox of Franchitti’s winning car. It was the fourth victory this season for Tucker and the third for Franchitti.

“We fought back with a car that wasn’t perfect and we were able to capitalize from strategy there at the end,” said Tucker. “The Extreme Speed guys have really been coming on strong so we feel good about today.” 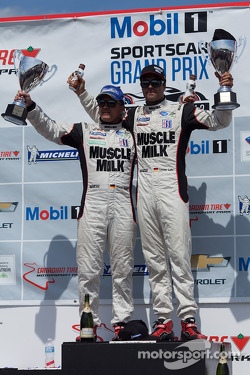 The P1 and overall victory went comfortably to Lucas Luhr and Klaus Graf in the No. 6 Muscle Milk Pickett Racing HPD ARX-03c. It was their fifth consecutive win at the track for Luhr and Graf, who led every lap Sunday en route to their fourth victory of the season.

Colin Braun and Jon Bennett combined to win the Prototype Challenge presented by Continental Tire (PC) class in the No. 05 Composite Resources ORECA FLM09 for CORE autosport. It was the second win this season for the duo. The No. 9 RSR Racing team of Duncan Ende and Bruno Junqueira led much of the early part of the race, but finished fifth after the car would not fire after a mid-race pit stop.

The GT Challenge class also had a barnburner finish. Saturday’s pole winner, Jeroen Bleekemolen, held off a last lap charge from Spencer Pumpelly to earn the victory alongside Cooper MacNeil in the No. 22 WeatherTech Porsche 911 GT3 Cup for Alex Job Racing. It was a triumphant return to for the team, which had to make extensive repairs to the car following a last-lap crash two weeks ago at Lime Rock Park.

“Fastest race lap, pole position and fastest in every practice but one is a good way to repay the crew for their hard work over the past two weeks,” said Bleekemolen. “In the end we had more fuel in the car and our tires were a little older, but we were able to maintain the lead.”

Next up for the American Le Mans Series presented by Tequila Patrón is the Orion Energy Systems 245 at Road America on Aug. 11. The race is part of a highly anticipated doubleheader weekend alongside the GRAND-AM Rolex Sports Car Series.