CORE autosports is tied with PR1 Mathiassen Motorsports for the PC team championship at 128 points apiece.

CORE autosport is seeking its third-straight Prototype Challenge Team Championship at the American Le Mans Series 2013 season finale. The team arrives at Road Atlanta tied for the lead in the team standings.

Team owner and driver Jon Bennett, who is currently third in the PC Drivers' Championship has hopes of winning his first ALMS driver title.

Canadian Mark Wilkins resumes his duties as third driver in the PC car alongside Benett and Tom Kimber-Smith. Wilkins last raced with the team in the ALMS season opener, the 12 Hours of Sebring.

Jon Bennett (Driver: No. 05 ORECA FLM09): "I’m really looking forward to Petit because it plays to our team’s strengths. For us, it’s always about making a good plan and executing that plan. 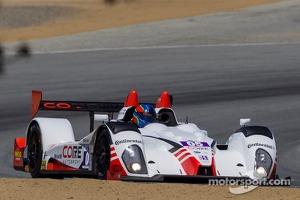 We have a pretty organized approach to our events. I think the fact that that it’s a long race is in our favor. In a longer race like that, there are always things that occur that you don’t expect and our team is good at responding to those situations. The championship is important, but what’s most important is getting each event done to the best of our abilities. The points are a reward for doing a good job, so for me, it’s unnecessary to get updates on the points lap-by-lap. If we do the best job we can at Petit, the points will take care of themselves."

Tom Kimber-Smith (Driver: No. 05 ORECA FLM09): "I don’t think the race being 10 hours is going to make a big difference for us. It’s endurance racing, but it’s really still a sprint race and everyone is going to be driving flat out. As long as we stay out of trouble and hit our marks there’s no reason we can’t win Petit Le Mans.

"It’s going to be crucial for the championship that we win Petit Le Mans. I think the cars in front of us in the championship will be playing it safer than us. We have to win and we have to be out front to put pressure on the other teams. If we’re leading, then it’s up to them to get by us."

Mark Wilkins (Driver: No. 05 ORECA FLM09): "I'm thrilled to be back in the PC car with CORE for Petit Le Mans. We had an excellent race last year, taking the PC class victory, and I’m definitely looking forward to repeating that! It’s also an honor to be a part of the last ALMS race in history.

“Joining Jon and Tom, my only goal will be to help the team achieve it’s third-straight PC team championship. It should be a fun time since Road Atlanta is one of my favorite circuits. I'm anxious to get on track and down to work."

Ready to close out season with a win on GT Class 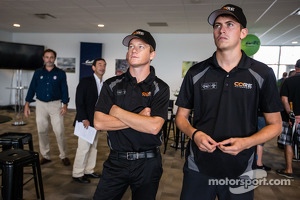 In a grueling 1,000-mile contest like Petit Le Mans, the team's reputation for quick pit work and smart strategy coupled with Porsche's reliability creates the opportunity to match or even improve on the VIR finish.

Patrick Long and Colin Braun are joined by Porsche Junior Driver Michael Christensen. The Dane is currently competing in the Porsche Mobil 1 Supercup.

Colin Braun (Driver: No. 06 Porsche 911 GT3 RSR): "Petit is all about staying alive, keep logging laps and having a good pace. It is always a challenging race though, because it seems like a lot of weird thing always happen at Petit that you don’t see at other races.

"I’m looking forward to the night racing in the Porsche. I’ve raced the PC car quite a bit at night and I don’t think the lights on the PC car are as good as the ones in the GT cars. With the extra light, I think it’ll actually be a bit easier racing at night than in the PC car."

Michael Christensen (Driver: No. 06 Porsche 911 GT3 RSR): “I'm very much looking forward, and happy to have the opportunity, to compete at Petit Le Mans with CORE autosport in the Porsche 911 GT3 RSR. I know it will be a good experience for me, and something to learn a lot from.

“It will also be a great experience to drive on Road Atlanta for the first time in my career. I’m eager to arrive at the track as I’ve only have heard good things about it!”

Patrick Long (Driver: No. 06 Porsche 911 GT3 RSR): "In a two hour and 45 minute race, we work from the finish, backwards. In a 10-hour you have a couple different objectives you’re aiming to hit. The first eight hours is about protecting the car and staying on the lead lap. Then, with two hours to go, the race starts for all the cars that are still on the lead lap.

"It’s the final ALMS race ever. It’s a home race for Porsche North America. It’s the final race for this Porsche model before the 911s arrive next year. With all those factors, a goal at Petit has to be a win. We’re against the odds for a win, but it doesn’t mean it’s impossible, especially in a 10-hour race.

"It’s a big honor to be racing in the final ALMS race. Petit Le Mans in 2003 was my first ALMS race, so my first and last ALMS race will be Petit Le Mans. The Atlanta fans really seem to understand sports car racing so there’s a great energy that motivates you. I’ve been fortunate to win in both the P2 and GT category a total of three times. I’d love to make it four."