Conquest ready for the Streets of Long Beach

Long Beach, California – April 11th, 2012 – After a successful series debut last month at Sebring, the Conquest Endurance team arrived at the track today with high hopes as they prepare to make their second ever start in the American Le Mans Series. Drivers Martin Plowman and David Heinemeier Hansson will compete this weekend in the Tequila Patron American Le Mans Series at Long Beach event. The two-hour race, the shortest in the 2012 calendar, has proven to be a vicious street fight every year and this weekend should be no different with an impressive 33-car ALMS field. 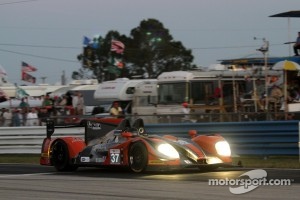 The team, who recently announced a partnership with Nissan North America, had a chance to test their new NISMO-prepared 4.5L V8 production based engine last weekend at Putman Park and after a productive day with Plowman behind the wheel will now participate in the ALMS as the only team with the successful powerplant.

Conquest Endurance and owner Eric Bachelart have a long history of success at Long Beach but this weekend’s event will mark the first time that they hit the track with a sportscar, having previously competed in various open-wheel series including the Indy lights, Champ Car and the IndyCar Series.

There will be little track time for Plowman and Heinemeier Hansson with only one two-hour session practice scheduled Friday morning before qualifying. Although it will be the first time for Plowman to drive a sportscar around Long Beach, the British driver has had previous open-wheel experience at the track. For Heinemeier Hansson this weekend will mark his first event race around a street circuit, making the limited practice time even more valuable for the 32-year-old driver.

If Sebring was an Iron-Man race, Long Beach is the equivalent of a street brawl. The track itself has a lot of flow with some signature corners like the hairpin and the fountain that are quite technical.

This weekend we will debut our new Nissan powerplant. It ran very well at the test and we were able to make the necessary modifications and improve the car, I think that it will suit the track very well. The forecast for the weekend looks like we are in for rain too, I haven't driven in the rain for nearly two years but I love wet weather driving, it will just add to the fun!”