Braselton, Georgia – October 19th, 2012 – Conquest Endurance was part of an exciting qualifying session today at the Petit Le Mans powered by Mazda as Martin Plowman narrowly missed pole position by only .002 seconds to its fellow Oak Racing Morgan machine. The #37 prototype turned a lap of 1m12.048s around the 2.54-mile track of Road Atlanta as it competed against the strongest P2 field that the series has seen this year. 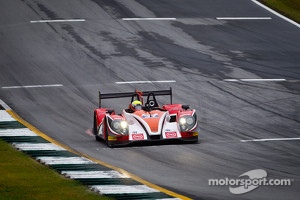 In what has been undoubtedly a successful rookie year in the American Le Mans Series presented by Tequila Patron, the Conquest Endurance team arrives at the season finale with two wins and three pole positions under its belt, and still with a mathematical shot at the P2 championship. Plowman and teammate Heinemeier Hansson trail the Level 5 racing team by 18 points in the standings, and can still take the title as long as their competitors do not complete 70% of the race distance. Joining the Conquest duo will be third driver Eric Lux who is no stranger to this type of pressure as last year he clinched his LMPC championship at this event.

Despite a small accident during night practice on Thursday, the Conquest crew showed their skills by quickly repairing their Morgan-Nissan and bouncing back in time for Friday’s morning practice where they made their last tweaks to their setup. During the qualifying session Plowman and the Oak Racing team proved that the Morgan chassis has become the one to beat in the P2 category by taking the top two spots.

Eric Lux Driver #37 Conquest Endurance / Morgan / Nissan Dunlop “The car is really good, the team is great and Martin and David have been doing a great job all weekend. I’m really excited that they have invited me to come race with me as they pursue their championship effort against Level 5. Martin did a terrific job in qualifying today, I think the car will be very strong during the race and this team obviously knows how to win so I feel very good about our chances tomorrow.”

David Heinemeier Hansson Driver 37 Conquest Endurance / Morgan / Nissan Dunlop “It was an exciting qualifying session today, Martin did an amazing job and it just goes to show you how competitive this category is that you have two car within .002 seconds each other. The team has done a great job and the car has just gotten better every session. Tomorrow’s race is definitely not going to be an easy one, traffic around this place can get quite tricky and sometimes you have to take risks, but we know that it’s a long 1000 miles and we have to make sure that we are there at the end to fight. We know we have the speed now we have to focus on taking the win tomorrow and closing out the season on a very high note.”

Saavedra is hoping to win in Toronto