Competition Motorsports returns to ALMS GTC at 12 hours of Sebring

David Calvert-Jones, Sascha Maassen and Lawson Aschenbach will will take on the Sebring effort in No. 99 Competition Motorsports Porsche 911 GT3, which follows GTC debut at 2012 Petit Le Mans and a competitive run last month in the Bathurst 12 Hour in Australia. 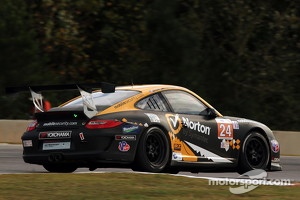 The Sebring trio of race and championship-winning drivers, along with a typically strong Porsche GT3 from Competition Motorsports, should make the No. 99 entry a legitimate contender in the competitive GTC class.

“We are very happy to have put together such a solid effort at a relatively late date but there is nothing last minute about this operation,” Calvert-Jones said. “Competition Motorsports and Bob Faieta always come to the track prepared, our particular Porsche GT3 is a car we know well and to have a pair of teammates like Sascha and Lawson is absolutely fantastic.”

Calvert-Jones made his professional motorsports debut last year at Sebring with a pair of Gold Cup division podium finishes in the IMSA Porsche GT3 Cup Challenge by Yokohama. The second and third place results at the Sebring opener set the foundation for a season-long run of nine podium results in 12 series starts on his way to second in the final Gold Cup championship standings.

The solid rookie season gave him the confidence to step up to GTC at Petit, a great learning experience with teammates Davis and Avenatti and Competition Motorsports despite being taken out in the race by a prototype competitor. Next weekend at Sebring will certainly add to CJ’s racing education with a pair of accomplished drivers like Maassen and Aschenbach on the squad.

“I have had some good teammates before but this duo ranks right up there with any other driver pairing in the race,” CJ said. “I look forward to working with and learning from them and keeping a pace within a reasonable touch of their lap times so we can challenge right up until the finish.”

Maassen has experience as a factory Porsche driver and is a four-time Sebring class winner, sweeping the GT class from 2001 through 2004. He also won back-to-back ALMS GT titles in 2002 and 2003 and has raced nothing but Porsches at Sebring.

“I am looking forward to racing with Competition Motorsports, David Calvert-Jones and Lawson Aschenbach,” Maassen said. “Even though I have raced many times in Sebring it is a new challenge every year. In GTC we are competing in a same car with all of the others. This is the fairest way of motorsport and every advantage you gain is because you worked better, either in preparation or on the track. I have raced in many cars at Sebring but all were Porsches so I am going to feel familiar in the GTC car as well. It is also not so different to the GRAND-AM GT3 Cup car that I drove in Daytona a few weeks ago.”

Aschenbach also has plenty of Porsche experience on his accomplished resume. He most recently campaigned the premier Porsche in the top-level GT class in the 2012 Pirelli World Challenge Championships. He last raced in the 12 Hour in 2010 as part of a GTC Porsche team.

“First and foremost, I have to thank CJ and Bob for the opportunity,” Aschenbach said. “I think we are going to have a fantastic entry. Any time you can put a Porsche factory guy and a very quick ‘am’ guy into a car you have a really good shot to win. Even though it is going to be our first week together, we don’t really know each other and we haven’t really raced together, I think we will jell pretty quickly and I know a lot of the guys on the team.”

The 61st Mobil 1 Twelve Hours of Sebring Fueled by Fresh from Florida is set for 10:45 a.m. ET on Saturday, March 16, at Sebring International Raceway. SPEED's live coverage begins at 10:30 a.m. EST. The ALMS website offers additional content such as live in-car cameras and timing and scoring for all users around the world. Viewers outside the U.S. can watch the Sebring 12 Hours and all ALMS races live on ALMS.com.

A native of Melbourne, Australia, Calvert-Jones has lived in Los Angeles for nearly a decade where he is a helicopter film and stunt pilot. His solid rookie season in IMSA GT3 Gold Cup last year saw him earn a victory at Canadian Tire Motorsport Park in July, a win that kicked off a run of seven-straight podium finishes. In addition to the championship runner-up honors, he also earned the season-long Yokohama Hard Charger Award for advancing the most positions in the Gold Cup class throughout the season.

Along with fellow Australians and cousins Alex and James Davison, Calvert-Jones saw a competitive and race-leading run from the pole in last month’s Liqui-Moly Bathurst 12 Hour in Australia end in the late stages of the event after a contact incident sidelined the Competition Motorsports No. 12 Porsche 911 GT3. The team led much of the race after qualifying first and Faieta made the trip down under to manage the team with local Porsche stalwarts McElrea Racing.

“We had a great run going there,” Faieta said. “Working with the McElrea team also was just a great experience. They are one of the top teams in Porsche GT3 Cup racing in Australia and Andy McElrea and the whole crew just did a wonderful job with the car. We prepped the car in California, sent it to them and they finished prepping the car and brought it to the track. It was just a really good solid team and CJ and the guys did a really good job of driving the car. We unfortunately got tangled up with a lapper, a slower car, and that ultimately took us out of the race but we led quite a few laps.”

Maassen has learned quite a bit in his Sebring victories. “To win this race we first have to try not to lose it,” Maassen said. “It is a 12 hour race and speed alone will not be enough. Even so, we did not test on the track yet but I am optimistic we will find a good balance that will suit all of the drivers and make the car survive the track.”

Aschenbach and Maassen will be the first drivers on the No. 99 team to test the Porsche. “It is just a matter of Sascha and I really getting down to business at the beginning part of the week and, once CJ gets there, getting him some seat time,” Aschenbach said. “So, I think we are going to be alright and I am just looking forward to the race. I have done Sebring before so it is nothing new to me, which is nice. Sascha and I will both get there on Sunday so we can begin testing right away on Monday and really get to work right at the beginning of the week. We haven’t tested there like a lot of other teams but I have no doubt in my mind that Sascha and I can get everything going and get ready for CJ and the race.”

Porsche in ALMS: One last look before the new era begins - video