SEBRING, Florida – Paul Miller Racing, and drivers Bryce Miller, Marco Holzer and Richard Lietz, finished sixth in Saturday’s 61st Mobil 1 Twelve Hours of Sebring Fueled by “Fresh from Florida” where the team ran as high as second and on pace with the leaders throughout the day in the No. 48 Chopard/TOTAL Porsche 911 GT3 RSR on Michelin. 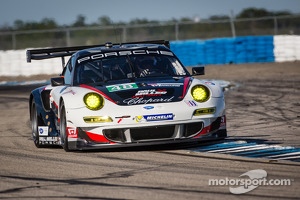 The Chopard Porsche ran competitively from the drop of the green flag with starting driver Holzer racing to second in his opening stint. All three team drivers kept the No. 48 Porsche on pace with the race leaders but a pair of unfortunately-timed pit stops and caution flags ultimately kept the team from challenging for a podium despite having front-of-the-pack pace.

“The highest we ran was P2 for one stint in the beginning,” Holzer said. “We had a good car but we got a little bit unlucky on the yellows and lost two laps. I think otherwise we would have been fighting maybe on the lead lap with the other guys up front for a podium. But for my first race with the team I am really happy. The pit stops were great and the setup was also good for the race.”

Miller drove second in the rotation between his works Porsche teammates Holzer and Lietz.

“It was very difficult,” Bryce Miller said. “We fell back a couple of laps and it was hard to get the laps back, but we got fortunate with some attrition in front of us and found some positions this way.

It’s the old story for Porsche that we can bring it home to the end. I am really excited and a great way to start the season, especially given we were two laps down.”

After running at times as low as 10th after losing the two laps, the No. 48 team and its drivers fought back into the top-five in the race’s late stages.

A final pit stop just 50 minutes from the finish saw the team return to the race in sixth with Lietz at the wheel for the run to the checkered flag.

“At the end, we were able to run with the big players in the GT category,” Lietz said. “I am very happy we were able to finish the race in our position, even though it was close with P5, but it was a fair fight. I was really never close enough to really attack in the end.”

“This was my second race with the team and I have to say we really improved from the performance side,” Lietz said. “We are there, right at the same speed with the others, and if we had optimized a little bit all of the other stuff we would have been able to fight for the podium.”

Team Owner Paul Miller was also pleased with what was the team’s best start to an ALMS season in recent years.

“The way the guys drove and the pace of the car was excellent,” Paul Miller said. “The car was prepared beautifully and ran very solidly all day mechanically. I think the team performed great.

We have been working really hard to get the car prepared properly, and get it bullet proof so to speak, because this track is so difficult on cars, it is so rough.

I am really proud of the preparation and Marco, Richard and Bryce did a good job with pace, but we just had two untimely pit stops that cost us some laps.

With a field this competitive, and a race that remarkably only had four caution periods in 12 hours, it is hard to make up that kind of ground.”