SONOMA, Calif. - Dec. 9, 2002 - It was announced Saturday that Kevin Buckler, team owner and driver for The Racer's Group, and co-driver Michael Schrom of Ghent, NY, took 1-2 in the prestigious 2002 Porsche Cup, an annual award given to the top ...

SONOMA, Calif. - Dec. 9, 2002 - It was announced Saturday that Kevin Buckler, team owner and driver for The Racer's Group, and co-driver Michael Schrom of Ghent, NY, took 1-2 in the prestigious 2002 Porsche Cup, an annual award given to the top independent Porsche drivers in the world. Buckler and Schrom were honored for his achievements during the 2002 season which included wins at both the Rolex 24 at Daytona and 24 Hours of Le Mans as well as numerous GT podium finishes in both the American Le Mans and Grand American Series. 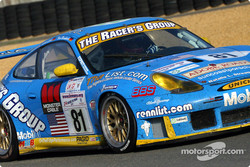 The Racer's Group Porsche 911 GT3-RS.
Photo by Eric Gilbert.
Buckler is the first driver in sports car racing history to win the Rolex 24 at Daytona, 24 Hours of Le Mans and the Porsche Cup in the same season, and Kevin and Michael are the first co-drivers in history to win one-two in the Porsche Cup. The Racer's Group finished second and third, respectively, in the team and driver championships in both the American Le Mans and Grand American Road Racing series. Since the inception of the Porsche Cup, Buckler is one of only four Americans to win the coveted award.

This year has been a dream season for The Racer's Group with the team winning the two most famous endurance races in the world, the Rolex 24 at Daytona and the 24 Hours of Le Mans. At Daytona, Porsche factory drivers Timo Bernhard and Jorg Bergmeister joined Buckler and Michael. At the 24 Hours of Le Mans, Buckler drove to victory again with Bernhard and brought on Lucas Luhr, another factory driver. In addition to winning at Daytona and Le Mans, the team enjoyed a total of 13 podium finishes this season and was the only sports car racing team to compete full time in both the American Le Mans and Grand American series.

"I am so honored and humbled to receive this award. I couldn't have done it without this absolutely fantastic team of individuals we have assembled. While the reward is for me as a driver, I am accepting it for the team. Many things had to come together. Our sponsors mail2web.com and Rennlist.com really stepped up and without them, we wouldn't have been able to do what we did. Their support allowed us to acquire better equipment and drivers. I owe a lot to my co-drivers Michael Schrom and Brian Cunningham, all the people at Porsche Motorsport as well as Porsche factory drivers Timo Bernhard, Jorg Bergmeister and Lucas Luhr who helped us secure both of the 24 hour victories," Buckler said of winning the Porsche Cup award.

Buckler, whose team evolved from the humble beginnings of his garage in Monterey, Calif., couldn't believe how things have evolved. "Who would have thought that a kid that only dreamed about owning a Porsche could end up receiving this fantastic award? My wife Debra and I started the company and race team nine years ago and all we have done since then is work hard towards achieving our dream. I couldn't have done it without her."

"To have become the first driver following Kevin with his Porsche Cup win clearly demonstrates how professional this team has been all year. Kevin has always been supportive, and under his tutelage, my driving has seen great development. Most importantly, Kevin has become a great friend to me. Nine years ago, Kevin wrenched in his garage, and I drove a Porsche for the first time in a Porsche Club green group Drivers Ed at Bridgehampton. I'd like to thank the Porsche Club of America, Porsche Motorsport and The Racer's Group for helping me achieve this level of success," Schrom said. 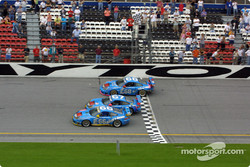 Checkered flag for the three Racer's Group GT3 R.
Photo by Andrew Schupack.
Buckler and Schrom will rejoin Bernhard and Bergmeister behind the wheel of the No. 66 Porsche GT3 RS at the Rolex 24 at Daytona and will continue to work hard to defend the team's title at both Daytona and Le Mans in 2003. In addition, the team will return with a full scale, two car effort in the American Le Mans Series next season.

The Racer's Group is a manufacturer and distributor of high performance Porsche parts, an engine and chassis building and tuning facility, a full service Porsche prep facility, and a professional race team. Additionally, they provide electrical and mechanical engineering services, driver development and "arrive and drive" services. They are also the North American distributor of the UNICHIP, a fully programmable piggyback computer system that enhances the performance of streetcars and currently support approximately 130 dealers in the U.S. The Racer's Group is based at Infineon Raceway, in Sonoma, Calif.