"Although we are in full support of IMSA and the American Le Mans Series, BMW of North America and BMW Team PTG cannot conform to the changes in the rules and regulations issued by the Automobile Club de l'Ouest (ACO) for the LM GT category for 2002," said Tom Purves, Chairman and CEO of BMW of North America, LLC. "In 2001 the M3 GTR was constructed at great expense to meet the 2001 homologation requirements and was granted its homologation accordingly. The 2002 rules and restrictions will not allow the M3 GTR to race competitively in the GT category. 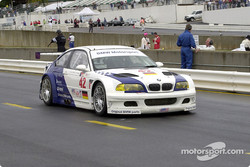 "The M3 GTR that competed for one season in 2001 was the culmination of six successful years of M3 racing development by PTG and BMW on both sides of the Atlantic. The decision to withdraw from the 2002 ALMS is not taken lightly, and it's unfortunate that BMW will be unable to build on its longstanding GT racing heritage in the U.S. in 2002," added Purves.

"BMW and PTG have faced our share of adversity over the past seven years together and I am proud of our achievements and consistency. We are all dedicated to racing at BMW; it's part of the fiber of our brand," said Tom Salkowsky, Motorsports Manager for BMW of North America. "In the end, our goal was always to raise the level of competition within the GT class. BMW, PTG, our drivers and crew members were looking forward to vigorously defending our 2001 championship. We are all greatly disappointed with this final result for 2002."

Prototype Technology Group President Tom Milner added, "Everyone at PTG is disappointed that after seven years of a successful partnership we are not able to defend BMW's championship this year. We will focus on other projects with BMW and we're hopeful for the 2003 season."

There are no plans for BMW to compete in the GT category of the ALMS with another BMW model in 2002. BMW of North America and Team PTG will assess their plans for the 2003 season as the 2002 season progresses.