Having successfully completing two days of pre-race testing, BAR1 Motorsports will kick off their 2013 American Le Mans Series Presented by Patrón Championship campaign this weekend at Sebring International Raceway in Sebring, Fla. The event will be the 61st running of the Mobil 1 12 Hours of Sebring Fueled by Fresh From Florida. The green flag drops 10:45am, Saturday, March 16, 2013. 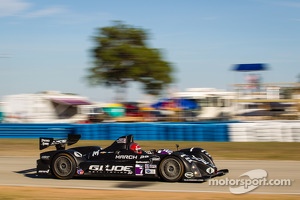 "It's exciting to finally arrive at the point we've been working toward all winter long," said team owner, Brian Alder. "One minute it feels like the start of the season will never arrive, and the next minute you're scrambling to get everything ready to take the green flag. There's never an in-between."

"Sebring is such a great place to start the year," added Alder. "It's such a demanding race in every aspect. Not only is it 12 hours, it's a test of every component on the car and your program. Every member of the team has to bring their "A" game if you're to have any chance of winning. It requires preparation, determination and a willingness to put it all on the line. It's probably one of the most unforgiving tracks and races in world."

"I really like our chances," continued Alder. "The cars have been completely overhauled since Petit and we have a great line up of drivers. Our testing this week indicates our driver pairings and third drivers are all well suited to each other. And while we've yet to show all of our speed, the cars are very strong and have shown we're very capable of running up front."

All Prototype Challenge teams were dealt a wild card prior to arriving at Sebring when the Series issued notice that all Prototype Challenge teams would be relegated to a new class tire supplier, Continental Tire. While the change is the same for everyone, teams have been left to quickly sort out their setups and develop race strategies based on the tire's performance.

"We're happy with new Continental Tires," said Alder. "Our initial tests indicate they're just as fast as last year's tire and are capable of multiple stints with minimal degradation in performance. It should be interesting to see how quickly teams are able to adapt and how each team stints the tire to suit their race strategy."

The 61st Mobil 1 Twelve Hours of Sebring Fueled by Fresh from Florida is set for 10:45 a.m. ET on Saturday, March 16 from Sebring International Raceway.