Audi Sport North America, with its powerful V12 engine powering the R10 TDI, and the torque to get off the corners and up the hills, atoned for its 2007 overall defeat at Road America with an authoritative performance in today's race. The duo of ...

Audi Sport North America, with its powerful V12 engine powering the R10 TDI, and the torque to get off the corners and up the hills, atoned for its 2007 overall defeat at Road America with an authoritative performance in today's race. The duo of Marco Werner and Lucas Luhr won again, padding their points lead with their sixth class win from seven starts. Leading home teammates Emanuele Pirro and Marcel Fassler, Audi scored a second consecutive one-two finish, the first time since 2006. 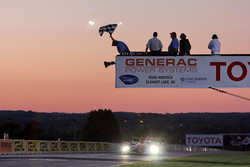 "It wasn't as easy as it looked, especially after the second-to-last yellow," Werner offered. "The Acuras clearly had good downforce and it was really difficult to overtake. The GT car helped, and I took them close and used the TDI power on the straight to key the win at the end."

Highcroft Racing and drivers David Brabham and Scott Sharp finished third overall but scored its third win in P2 this season. Johnny O'Connell and Jan Magnussen took another GT1 win for their Corvette, while a last-lap pass netted the victory for Dirk Werner, Bryce Miller and Richard Westbrook in the Farnbacher Loles Porsche 911 GT3 RSR.

With a longer distance there were also more caution periods. The first hour featured three cautions, with the middle of the race mostly under green, but the closing portion saw the field ride around behind the pace car several more times. A total of seven yellow flags flew.

In that first hour, Gil de Ferran caused two yellows when he ran aground of GT2 traffic. In each case, the de Ferran Motorsports Acura ARX-01B contacted a Doran Ford GT-R, the Black Swan Racing entry first followed by the Robertson Racing car. The first collision led to a penalty, as too many crewmembers serviced the wounded Acura during a pit stop.

"It was unfortunate what happened early; I made some bad decisions and then we got a penalty from race control, which I didn't understand," de Ferran remarked. "That lost us a lot of laps, and we were only a couple laps back which wasn't too bad. The team made a great setup for the race, but it's a shame we got so far behind. We wanted to do well for Keith (Jones, injured crewmember from Mid-Ohio pit fire), but that's the way it goes. We were really moved by what all the teams did on his behalf."

Initially, in a repeat of the race at Miller Motorsports Park in Utah, Jon Field provided some opening fireworks with some dynamic laps in his Intersport Lola AER. Field carved from 8th to 3rd, surpassing both Audis once they pitted. Order was restored a few laps after a restart when seven cars made a dive into Canada Corner all at once, and shortly thereafter Luhr retook the point.

"Today, I had a good opening stint, and the yellows in the beginning didn't play into our hands, because we wanted to achieve a bigger gap," Luhr noted. "You have to give credit to Jon Field and all the team, but I knew it was only a matter of time before catching him. I knew it wasn't going to last very long."

The middle of the race was mostly clean, the Audis leading a bulk of it overall with good dicing in P2 amongst the Acuras of Scott Sharp, Adrian Fernandez and series debutante James Rossiter, and the Romain Dumas-wheeled Penske Porsche. Oliver Gavin paced GT1 in his Corvette with Jaime Melo leading most in his Ferrari 430GT in GT2.

The Corvettes were dicing once again in GT1 but yet again lady luck bit the number four entry of Oliver Gavin and Olivier Beretta. Gavin ran wide on the exit of the kink, and unfortunately contacted a sign on the left side of the track. The fact it said Champ Car was cause for a good chuckle in the media center, and apparently represents the devotion to recycling on the Road America track's behalf.

Once Gavin was out the GT1 class was left for O'Connell and Magnussen to take. The returning Bell Motorsports Aston Martin DBR9 came second for their best result of the season.

"It's nice to get one here with Jan because he used to be in the competitors car," O'Connell said. "It's nice to win one with him. Things are going our way this year, and previously any luck would go against us. We spent more time in the pit than the four guys, but the way the strategy worked out in the end, regardless of what happened, it probably would have come to us at the end."

Gavin's accident, the fifth caution, proved vital in terms of fuel strategy. The Highcroft Acura stopped three times on the previous yellow with Scott Sharp turning the car to David Brabham, and thus stayed out to assume the lead. The other prototype contenders made their final visits to the pits, with Fernandez, Montagny and Butch Leitzinger taking on fuel only with the two Audis and Timo Bernhard's Penske Porsche adding both fuel and fresh rubber.

Though Brabham leapt to a massive jump on the restart, it was quickly nullified. The sixth caution of the race occurred once Fernandez spun out of second place. The owner/driver was under pressure from Montagny, but after riding the curbing exiting turn one, Fernandez's left rear suspension broke. A great run, as the Fernandez team was in search of their first class and overall victory, ended in the gravel.

On the ensuing restart, the race was decided once the three leaders (Brabham, Montagny and Werner) encountered the Robertson Ford GT-R. Out of the final turn, the Ford balked Brabham and the other two benefited from great momentum. Werner passed them both up the hill and under braking into turn one, Montagny passed Brabham for the P2 lead.

The day was not done yet. The final full course caution occurred once Montagny, in position for victory, banged wheels with the Drayson-Barwell Aston Martin at Canada Corner. While the Aston retired on the spot, Montagny limped to the next corner but the victory wasn't on the cards. Andretti Green Racing's first win since their debut round at the 2007 Sebring 12 Hours will have to wait for another day.

"On the one restart I got a great jump from everyone, but of course another yellow came out that bunched everyone up," Brabham said of his victory that nearly didn't happen. "It was difficult to hold off the Audis because they are so fast on the straight, but the GT car cost me a lot on the straight."

"Franck was right in his tow so I had to let them both go. Momentum kept the Porsches behind but then of course Franck gifted the win to us at the end. It's a shame because we could have had Acuras 1-2 at the end. We managed to pick up the pieces after that."

The last lap was intriguing in GT2, for Mika Salo led most of the race in his Risi Competizione Ferrari and was looking for his first win of a fraught season. The negative momentum continued. Salo was blocked, inexplicably, by his teammate Harrison Brix in the other Ferrari. Dirk Werner took the lead into turn one, which he held through turn five. A last-gasp effort by Salo at turn five resulted in a spin.

Dirk Werner, Bryce Miller and Richard Westbrook delivered the first ALMS win for Farnbacher Loles Racing in their Porsche 911 GT3 RSR. The Flying Lizard Porsche of Jorg Bergmeister and Wolf Henzler was second, thanks to a number of great late race passes, with pole sitters Tafel Racing in their Ferrari third with Dirk Mueller and Dominic Farnbacher driving.

Race winners in P1, P2, and GT1 retain their points leads with Bergmeister and Henzler, unofficially keeping the top spot in GT2. The ALMS returns to action in two weeks time, racing at Mosport in Canada August 22-24.