The Aston Martin #97 was in eighth, having complete 318 laps of the 3.4 mile circuit. The #007 completed 307 laps to finish in ninth. Aston Martin continues pre-season testing at Sebring

Aston Martin Racing has continued to gather vital data for both of its Gulf-liveried Vantage GTEs this weekend at the American Le Mans Series 12 Hours of Sebring, despite minor issues preventing either from challenging for the win. 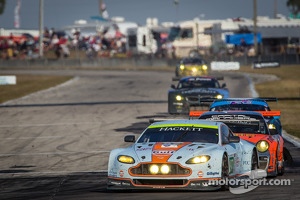 Good pace and reliability throughout testing in Portimao, Road Atlanta and then at Sebring earlier this week saw the V8-powered charger prepare well for the race.

However, high levels of traffic and slower cars in the opening laps were to put an end to the car’s challenge for the win, when front-end contact damaged the its radiator.

A quick repair from the team saw the car back out on track and new team member Senna make his competitive debut, but the time in the garage could not be recouped.

Darren Turner comments: “The start of the race was interesting; the cars bunched up on turn one and I found the car sandwiched in. It settled down a bit but I soon caught up with the traffic.

A slower car, surrounded by lots of traffic, braked suddenly and I shunted into the back of it. I thought we’d escaped damage but it turns out it affected the radiator, making the engine overheat.

“The crew did a great job getting it fixed so quickly. We were able to get back out on track and carry on gathering miles on the car ahead of the first round of the WEC at Silverstone next month.”

Stefan Mücke adds: “Yes, the car has run like clockwork all week. We’ve learned a lot, especially today under race conditions, and it’ll prove invaluable for the 6 Hours of Silverstone.

Bruno suffered from a sickness bug but still raced brilliantly today. He was on pace and did a really nice job. It’s good to have him in the team.”

Meanwhile, the #007 car – a race-winning 2012-specification Vantage GTE – had a strong start to the race, with Pedro Lamy (PT), Billy Johnson (US) and Paul Dalla Lana (CA) taking the stints in turn.

This was until a throttle cable issue brought it back to the garage, where the team repaired it quickly. The car continued to compete faultlessly for the second half of the race but was unable to make up the lost time.

Pedro Lamy comments: “It’s been great to be part of this race with Aston Martin Racing. The team is professional and friendly and works incredibly hard.

I did the first stint in the #007 today and it felt very good straight away. The car quickly settled in and allowed me to get a good advantage in the first few laps. Other than the short time in the garage, it was perfect.”

John Gaw, Aston Martin Racing’s team principal adds: “It’s unfortunate what happened to Darren but it was totally unavoidable. The team did a great job and we’re pleased that the car has otherwise run faultlessly.

The #97 is very well prepared for Silverstone and we’ve had excellent reliability for a car that has a number of new parts.

“The #007 car and team have also had a really good week. Pedro put in a seriously impressive qualifying lap yesterday to start the car from fourth on the grid.

The race started very well for the car and the crew did a great job to fix it and get it back out on track so we could continue to gather data. It’s not an ideal start but we’re here in preparation for the WEC and, in that respect, everything is good.”

The cars and crew will stay at Sebring International Raceway this week so that newcomers to the team; Peter Dumbreck, Kristian Poulsen, Christoffer Nygaard and Allan Simonsen, can have time in the car ahead of the start of the WEC season, which kicks off on 14 April with the Six Hours of Silverstone.