LE MANS, FRANCE – With Audi seemingly a lock to win the 24 Hours of Le Mans for the 12th time since 2000 thanks to an imposing trio of R-18 e-tron quattro LMP1 prototypes atop the starting grid, those seeking competitive intrigue can gravitate toward the other three classes that round out the 56-car field.

LMP2, LM GTE Pro and LM GTE Am – that’s where the closest battles may be fought. It’s also where most of 33 drivers from the American Le Mans Series (ALMS) presented by Tequila Patrón and the GRAND-AM Rolex Series will compete, starting Saturday at 9 a.m. ET (live on SPEED). 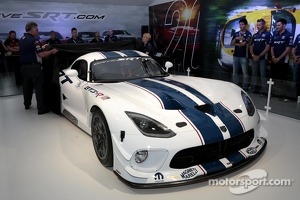 Presentation of the Viper GT3-R

There is much uncertainty, though, for many teams after two days of practice and qualifying sessions repeatedly hampered by rain and red flags caused by accidents. Teams have struggled to get a handle – much less grip – on their 24-hour approaches.

The lack of optimum track time has certainly been troubling for the SRT Motorsports program that is fielding two SRT Viper GTS-Rs in the LM GTE Pro class. Viper is making a heralded return to Le Mans for the first time since 2000, when it won its third consecutive 24 Hours.

What the Vipers don’t have are desirable starting spots. The No. 53 SRT Motorsports Viper starts 10th in LM GTE Pro. Co-drivers are ALMS full-time drivers Marc Goossens and Dominik Farnbacher alongside Ryan Dalziel, a GRAND-AM regular who won Le Mans last year in the LMP2 class and was named SPEED’s sports car racer of the year. 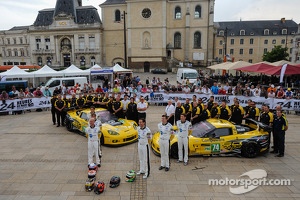 The No. 93 SRT Motorsports Viper has former GRAND-AM driver Jonathan Bomarito, now a full-time ALMS racer, combining with Tommy Kendall – the former sports car great who is amidst an admirable comeback – and his season-long teammate Kuno Wittmer. The No. 93 starts 11th in the 12-car LM GTE Pro field.

Also struggling in qualifying was Corvette Racing, seeking its eighth class victory at Le Mans since 2001. Poles of the past, much less wins, seem especially distant memories when cast against a puzzling present reality.

The No. 74 Chevrolet Corvette has a cross-pollination of ALMS and GRAND-AM with Oliver Gavin (ALMS), Tommy Milner (ALMS) and Richard Westbrook (GRAND-AM) the co-drivers. The car starts eighth in LM GTE Pro.

The No. 73 Chevrolet Corvette of Corvette Racing starts ninth in LM GTE Pro. Co-drivers: Antonio Garcia and Jan Magnussen of the ALMS and Jordan Taylor from GRAND-AM. Another talent-laden lineup starting surprisingly deep.

Thus, an anticipated showdown between Viper and Corvette has yet to develop. Of course, there’s plenty of time for that to develop over the course of 24 hours of road racing on the world’s most famous road course.

“The fragmentation of the sessions has been frustrating but we’re not making excuses,” said Gavin. “This is the package we’ve come with but it’s not worked out for us so we’ve just got to work harder.

“We’re catching up … we are confident we’ll have a comfortable car for the race.”

Added Milner: “You want to be competitive to run at the front, and we’re not quite there. We’ve improved the car handling-wise. Obviously faster is better than slower, so we’re going in the right direction.”

Dalziel sounded likewise optimistic, saying, “I’ve never seen so many cut practice sessions and yes, it’s affected our program this year, but it’s affected everybody. We just didn’t want to damage the car [in practice]. We’ve definitely sat back. It’s been a tough one with a new program and new car.

“But what wins this race is having a car that can do the same lap time from Lap 1, and after 24 hours having no mistakes, no penalties and keeping it on the track. For the race we’re confident on having a good race car. It’s our goal to be the smartest team here.”

Following is a rundown of the rest of the teams with ALMS and GRAND-AM flavor will roll off Saturday, shortly after GRAND-AM founder Jim France waves the French flag to start the race’s 90th anniversary running. Teams are listed in order of grid position.

- GRAND-AM regular Stephane Sarrazin has honors for the best starting spot in the ALMS/GRAND-AM crowd. The No. 8 Toyota Hybrid starts fourth overall. Sarrazin co-drives the LMP1 entry with Anthony Davidson and Sebastien Buemi.

- Rebellion Racing, which has fielded the No. 12 Lola/Toyota in all three 2013 ALMS events thus far, stars sixth overall with season-long teammates Nick Heidfeld and Neel Jani joined by Nicolas Prost. Rebellion’s No. 13 entry, co-driven by Andrea Belicchi, Mathias Beche and Cong Fu Cheng, qualified seventh overall; there are a total of eight cars in the LMP1 field.

- ALMS P1 driver Lucas Luhr is in LMP2 at Le Mans, co-driving the No. 38 Zytek Z11SN Nissan for Jota Sport with Simon Dolan and Olivier Turvey. The car starts third in a stout, 22-car LMP2 lineup.

- The ALMS’ Maxime Martin has traded his normal ride, the No. 55 Crowne Plaza BMW Z4 GTE in the ALMS for an LMP2 machine at Le Mans. He is co-driving the No. 46 ORECA/Nissan with Pierre Thiriet and Ludovic Baley. They’ll start 11th in class.

- In the No. 41 Zytek/Nissan LMP2 entry, the ALMS’ Tom Kimber-Smith is co-driving with Eric Lux and Alexander Rossi. They’ll start 13th in class.

- Another ALMS driver in LMP2 is Jeroen Bleekmolen, co-driving the No. 34 ORECA/Judd with Patrick Neiderhauser and Michel Frey and starting 14th in class.

- Level 5 Motorsports from the ALMS is considered potential podium material in LMP2, with owner-driver Scott Tucker, Marino Franchitti and IndyCar veteran Ryan Briscoe the co-drivers of the No. 33 HPD-ARX/Honda. A podium is going to require some passing; the car starts 18th in LMP2.

- In LM GTE Pro, full-season Risi Competizione ALMS teammates Matteo Malucelli and Olivier Beretta are both driving Ferraris, albeit different ones in the 24 Hours of Le Mans. Malucelli is sharing the No. 51 AF Corse Ferrari 458 Italia with Gianmaria Bruni and Giancarlo Fisichella, while Beretta is in the No 71 Ferrari 458 Italia with Toni Vilander and Kamui Kobayashi. The No. 51 will start fourth in LM GTE Pro, two spots ahead of the No. 71, which starts sixth.

- The No. 98 Aston Martin Vantage V8 co-driven by Bill Auberlen, Paul Dalla Lana and Pedro Lamy qualified fifth in LM GTE Pro. Auberlen races regularly in both ALMS and GRAND-AM, while Dalla Lana concentrates on the latter, typically teamed with Auberlen. The No. 98 is part of a four-car Aston Martin Racing team at Le Mans; two of those cars start 1-2 in LM GTE Pro while a third starts atop LM GTE Am.

- In LM GTE Am, ALMS regular Wolf Henzler joins Pascal Gibon and Patrice Milesi in the No. 67 Porsche 911 GT, starting seventh in class.

- The sole GRAND-AM team competing, 8Star Motorsports, has a Ferrari 458 Italia going go off ninth in LM GTE Am. Enzo Potolicchio, Rui Aguas and Jason Bright are the drivers for the team carrying United SportsCar Racing and the new-for-2014 IMSA logo on its No. 81 machine.

- From an 11th-place start in LM GTE AM, ALMS driver Cooper MacNeil is co-driving a Chevrolet Corvette while GRAND-AM’s Ricky Taylor is co-driving a Corvette that starts 12th in the class. MacNeil and the aforementioned Bleekemolen co-drove to the GTC class victory in March’s Mobil 1 Twelve Hours of Sebring Fueled by Fresh From Florida.