September 26, 2011 (Los Angeles, Calif.) - With the momentum of a victory at the American Le Mans Series' penultimate round at Mazda Raceway Laguna Seca two weeks ago, Duncan Ende, with teammates Spencer Pumpelly and Peter Ludwig, the trio returns for the season-ending Petit Le Mans this weekend at Road Atlanta near Atlanta, Georgia. 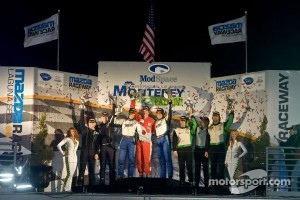 Ende, a winner at Petit Le Mans in 2010 in the GT-C class, is looking to go two in a row in the annual endurance racing classic. He and Pumpelly have combined to win three GT-C races this year in the no. 66 TRG / STANDD.org/ Racer's Roast Porsche 911 GT3 Cup, and the duo sit second in the GT-C class championship with only this Saturday's ten hour or 1000 mile Petit Le Mans remaining in the 2011 ALMS season. With a twenty-one point deficit to Tim Pappas in the no. 54 Black Swan Racing Porsche, the duo still have an outside shot at the championship with 30 points on offer for the victory.

In last year's Petit Le Mans, Ende teamed with Andy Lally and Henri Richard to narrowly take victory in the GT-C class - with the no. 54 Black Swan Racing Porsche close behind in second. A year later, the TRG and Black Swan teams will likely be battling for the race win again as Ende and Pumpelly look to take the championship from Pappas.

"We are going to be flat out from the drop of the green and we are going for it," said Ende. "We're only worrying about getting the win and if we somehow end up with the championship too, that will be great. We're sort of in a no-pressure situation in that we have a lot less to lose than the guys in the 54 car. They have to be more careful and conservative in order to preserve their championship, while Spencer, Peter, and I can go for it and be aggressive."

Petit Le Mans often becomes a game of dealing with traffic and pitstop strategy. This is true in any endurance race, but the fast Road Atlanta circuit means very short laptimes and extra havoc for the GTC cars which will have to contend with the factory LMP1 cars that lap up to 15 seconds a lap quicker.

"Even if we are in the lead with no pressure from behind, we still have a lot of traffic to deal with at Road Atlanta," said Ende. "Some of the closing rates are incredibly quick and often you don't even see what's coming until they have gone by. You just have to be really on your toes and anticipate when the traffic is going to come by. It's very challenging to stay out of trouble for the entire race, but having a good car like our TRG Porsche will really help us out. The guys in our pit always find a way to give us a leg up with the strategy which is key at Petit Le Mans."