While next year's 24 Hours of Le Mans is still over six months away, it's not too early to start planning for the 2009 edition of the French endurance racing classic. That's what the Automobile Club de l'Ouest did Monday, as the organizers handed ...

While next year's 24 Hours of Le Mans is still over six months away, it's not too early to start planning for the 2009 edition of the French endurance racing classic. That's what the Automobile Club de l'Ouest did Monday, as the organizers handed out 29 automatic invitations to the twice-around-the-clock marathon, scheduled for June 13-14. 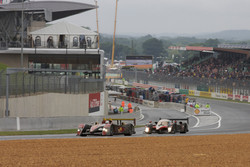 Who could not forget this year's thrilling race, which saw Audi and Peugeot battle down to the wire with its diesel-powered prototypes? Audi Sport Team Joest looks to defend its Le Mans title next year, with three R10 TDIs given automatic invites. Team Peugeot Total, which scored runner-up positions at both Le Mans and in the European-based Le Mans Series championship, have two guaranteed spots.

Porsche RS Spyders locked out the LM P2 list of auto invites, but it's unlikely any will take up the challenge. Van Merksteijn Motorsport earned two entries thanks to its Le Mans Series class championship and victory at Le Mans, but the Dutch team has since announced plans to shift focus to rallying next year.

Penske Racing, which took home the ALMS P2 teams championship and class victory at Petit Le Mans, has an uncertain future and will likely also forgo its two invites. Team Essex has been granted an entry for its runner-up finish in the Le Mans Series championship, but the Danish squad recently closed its doors.

This leaves Horag Racing as the only real possible team to take up its P2 invite, although the Swiss squad is currently looking for partners to fund its program after Fredy Lienhard's retirement.

The LM GT1 ranks features eight invites, with 2008 class winners Aston Martin Racing heading the list. At least one factory DBR9 will likely challenge Corvette Racing's two Corvette C6.Rs for the final time, as the Detroit-area based team moves its program to GT2 after its GT1 swansong at Le Mans. 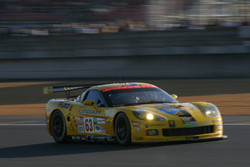 Luc Alphand Aventures will likely strengthen the Corvette presence at Le Mans next year, with the French team been awarded an invite for its Le Mans Series title. Runner-up to Alphand in the LMS, Team Modena, will unlikely use its entry in GT1 as the moves to GT2 for 2009. Bell Motorsports, another Aston Martin squad, secured a Le Mans invite thanks to its partial ALMS campaign, and posed as the only opposition to the Corvettes in GT1.

Newly crowned FIA GT Champions Vitaphone Racing has been given an invite, as has runner-ups Phoenix Carsport Racing. However, the Vitaphone squad will unlikely be able to use its entry, as it earned the invite with its Maserati MC12, a car not ACO homologated.

Ferrari appears to be the car of choice in GT2, as six of the eight auto invites are Prancing Horses. Two F430 GTs come from Le Mans and Petit Le Mans class winners, Risi Competizione. BMS Scuderia Italia has also secured a brace of entries, thanks to its runner-up result at Le Mans and in the FIA GT Championship.

Virgo Motorsport, which scored back-to-back Le Mans Series class titles, will likely pick up its invite, as will AF Corse, which secured the championship in FIA GT.

Teams have until January 12 to confirm their entry and are not permitted to use their invitation in a different class. The ACO generally releases its first list of confirmed entrants by the end of February. This list usually includes a selection of new teams in addition to those that took advantage of automatic invites.