A Lap of Road America with Corvette Racing's Tommy Milner 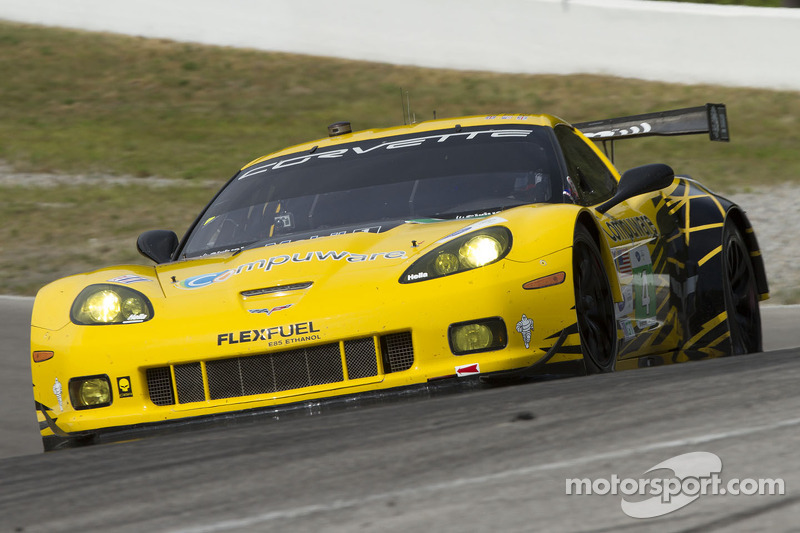 ELKHART LAKE, Wis., Aug. 7, 2012 - Road America is a racetrack that sports car drivers both revere and respect. Like the famous 24 Hours of Le Mans circuit in France, Road America's extended straights are a test of horsepower and its high-speed curves are a test of bravery. 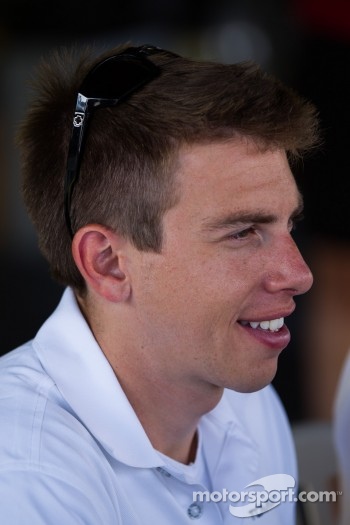 Before the green flag waves for the American Le Mans Series (ALMS) Road Race Showcase on August 18, we asked Corvette Racing driver Tommy Milner to take us for a virtual lap around this fast, flowing circuit that winds through the hills and valleys of Wisconsin's Kettle Moraine. Here is what the 26-year-old driver and 2011 24 Hours of Le Mans winner had to say about this challenging 4-mile, 14-turn road course that's known as the National Park of Speed.

"I like race tracks that are fast, with quick corners and a layout that has a rhythm - and Road America has all of those things," Milner said. "When my Corvette's setup is right and the car feels comfortable, it's a very rewarding lap.

"Turn 1 is very fast and very difficult because you are turning and braking simultaneously. I approach the first turn flat out in sixth gear, then downshift to fourth and use the access road on the left side as my braking reference. The key here is to carry the engine speed through the middle of the corner and then get back on the power hard. 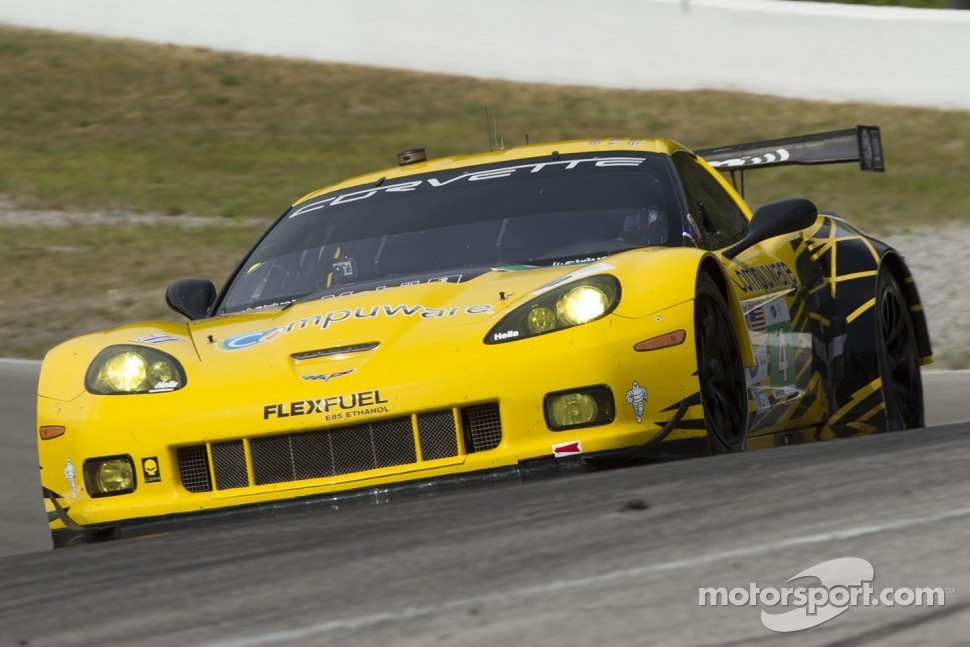 "Coming out of Turn 1, I shift up to fifth gear through the gentle Turn 2 bend and approach Turn 3, which can be a difficult corner to get right. Going into the turn, I downshift to third; with the camber in this corner, it's easy to lock up right front tire. If you're close behind another car coming out of Turn 1, then Turn 3 can be a good passing opportunity. However, there's not much room at the exit with a ditch behind the rumble strips, so if you use the curb you have to get back on the road quickly.

"Turn 4 is just a gradual bend in the road, but Turn 5 is super important because it's a great passing opportunity. Going downhill under the Sargento Bridge, I'm in sixth gear through one of fastest parts of the track. The braking zone for Turn 5 is a great place to pass; we decelerate from 150 mph, so the balance of the car under hard braking is critical. There's room on the exit to run wide, and then it's back hard on the throttle going up the hill to the Corvette Bridge.

"You have to be easy on the brakes going under the Corvette Bridge into Turn 6 because the car gets very light going over the crest of the hill. It's a blind corner, too, which adds to the excitement factor. This corner has a lot of grip, so it's possible to toss the car across the apex and then let the track catch it at end of Turn 6 - big fun! 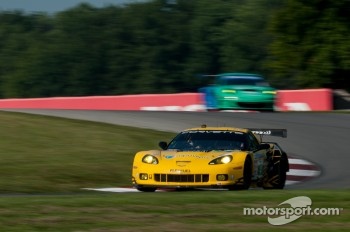 "I'm back on the throttle hard going into Turn 7 and through the Hurry Downs, one of my favorite sections at Road America. The car needs good balance to make this transition quickly; if it's right, you don't use the brakes at all, just lift a little on the throttle. Turn 8 is a tight, 90-degree corner, so if the guy in front makes a mistake in Turn 7, you can really put the pressure on here. The track is typically a little slippery here in the braking zone. I go down to second gear, let the track catch the car in the apex, and then power slide out of Turn 8.

"Next up are Road America's most famous corners, the Carousel and the Kink. I hold my breath a bit, and get settled for this very difficult series of turns. Going into the Carousel, I bring the car to the left and try to drive it as flat and long as possible, usually taking several apexes. I turn the steering wheel to the to point that I can get the most out of the front tires, and use my right foot on the gas pedal to steer the car. The Carousel sets you up for the long, fast ride through the Kink and Kettle Bottoms.

"The Kink gets your undivided attention - it's one quick corner. There are faster corners, but the Kink is special because you can't take it flat out. It becomes a game to see who can stay on the throttle the longest. Hitting a curb in the Kink can upset the car, and that's the last thing you want in that corner. I enter the Kink in fifth or sixth gear, depending on the gear ratios, and lift just a bit on the entry. I admit that on the first lap I do tap the brake, but after that I go through the Kink without braking - although my foot is usually hovering over the brake pedal! 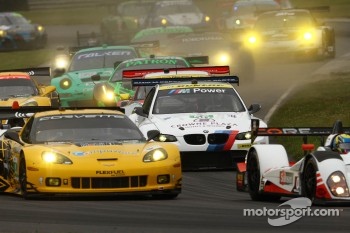 "After the Kink, it's a flat-out run down through a tunnel of trees to Canada Corner and another excellent overtaking opportunity. If you have a fast car, you can really make up time on a competitor, but it's difficult to pull off a pass if he drives a defensive line. I shift down to second gear for Canada Corner, and it's important to have car that puts the power down well to accelerate through Thunder Valley and the Bill Mitchell Bend.

"Turn 13 seems to get faster every year as the engineers find new ways to give us more downforce. The exit is very fast, but it's tough to see where the apex is and how much room you have at the exit. Last year I had a close encounter with the wall there when I was pushing too hard on cold tires. I learned that Turn 13 can bite you.

"It's important to get good exit from Turn 14, the final corner, because it leads onto the long, uphill straight. The car gains speed slowly climbing the hill, and then sets you back in the seat when the track finally flattens out. The front straight is a good place to draft. The GT cars often run two-wide here, which makes it difficult for the faster Prototype cars to get around us, but that's just part of the multi-class racing in the American Le Mans Series.

"Corvettes have raced at Road America since the good citizens of Elkhart Lake opened the track in 1955. When I think about the great Corvette drivers who have competed at this historic track, it makes me proud to carry on the tradition at one of the world's greatest road courses." 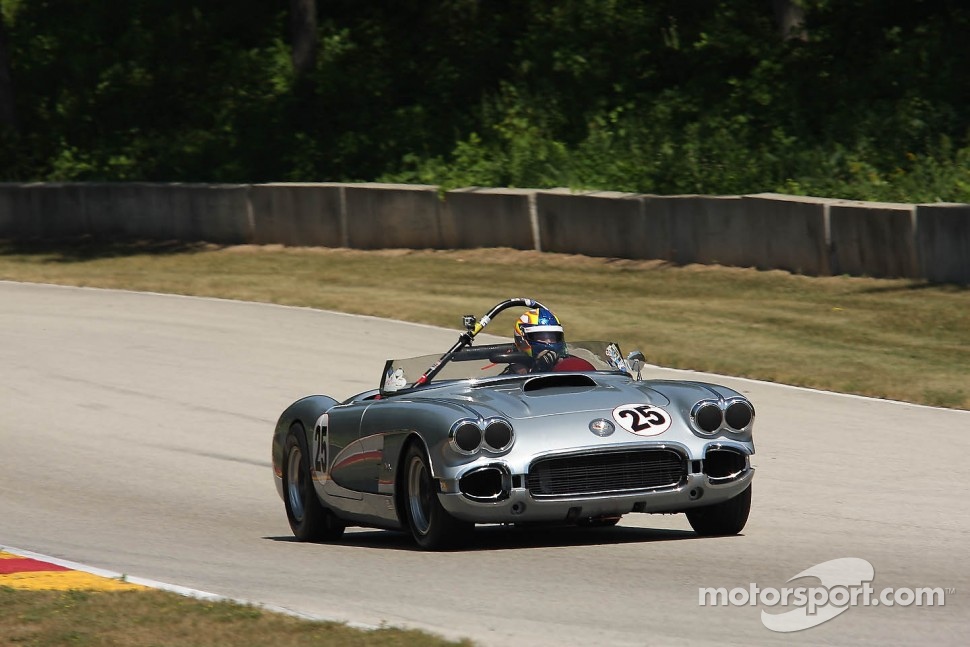 Practice and qualifying for the weekend begins on Thursday, August 16 with the first races for the International Motor Sports Association (IMSA) GT3 Cup, IMSA Lites, USF2000, SCCA Pro Racing and Trans-Am taking place on Friday. The ALMS four-hour finale starts on Saturday at 2:30 p.m. CT where everything from prototypes to production-based sports cars from numerous manufacturers in several classes will battle for position as they fiercely negotiate the high-speed straightaways and dramatic passing areas that make Road America one of the most revered circuits on the ALMS schedule.

On Sunday, August 19, hundreds of dedicated Corvette racers and enthusiasts will celebrate the marque's 60th year in production at Road America during the Corvette World Tribute; a gathering of vintage and contemporary examples of America's favorite sports car at America's greatest road course.

All racers, performance enthusiasts, collectors, hobbyists and fans are invited to participate in this special gathering. Road America is working with the National Council of Corvette Clubs (NCCC) and the Kettle Moraine Corvette Club to coordinate the Corvette World Tribute. Road America will manage car owner/driver event registration, which remains open until August 19 but entries are limited for some activities.