A full circle for Theys, Lienhard

Many years have passed since Didier Theys and Fredy Lienhard sat behind the wheel of legendary Porsche sports cars in endurance races. In 2008, the road racing veterans will reunite with the famed German brand, completing the full circle by racing Porsche's latest prototype, the RS Spyder. 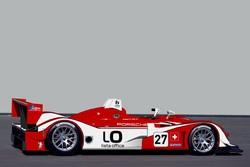 Since its arrival in late 2005, the Porsche RS Spyder has been the dominant car in the LMP2 category of the ALMS. Taking class victories in 18 of the 22 races entered to date, the factory Penske Racing cars have also won a record eight straight races overall in 2007. Penske Racing claimed the drivers' and manufacturers' championships in both 2006 and 2007.

After campaigning a Lola B05/40 Judd for the last three seasons, Switzerland-based Horag Racing knew it was time for a new prototype. Car owner Fredy Lienhard had to make a tough decision himself, whether to hang up the helmet or continue racing for the next few years.

"For me, I needed to make the decision whether to retire or accelerate," Lienhard said. "We were not very happy with the Judd engine [in the Lola] because they did not do as much development as they did with the [LMP1] V10. When they finally told us that they would make a new engine [for LMP2], it was too late."

Despite winning the Monza 1000km with the Judd-powered Lola, Theys knew the car wouldn't be competitive heading into 2008. After the second LMS round at Valencia, he approached Porsche, hoping to work out a deal.

"We felt that we needed an update on our equipment to be more competitive," he said. "We looked at all of the options and of course Porsche [was there]. I then contacted them in June. We discussed it. It took quite a long time to put it all together because we were not sure the [level of] service that they could provide us in Europe. Finally, we had the answer."

Horag will take delivery of two RS Spyders in November. Lienhard said the second chassis will be used as a spare instead of purchasing the costly spares package. They hope to complete a few winter tests in southern Europe before debuting the car at Sebring in March. 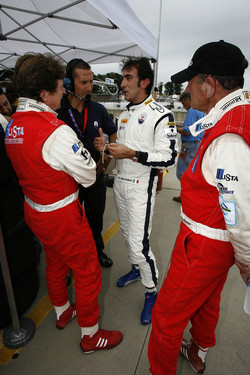 Didier Theys, Andrea Bertolini and Fredy Lienhard.
Photo by Eric Gilbert.
While the RS Spyder has a proven racing pedigree in North America, it has yet to enter a race in Europe. Thankfully, Horag will have the full technical support of Porsche, which will help adapt the P2 contender to the classic European circuits. Additionally, the team's shop is located only 130 miles away from Porsche's motorsport center in Weissach, making it even easier for added support.

"It will be a challenge adapting the car to the European tracks," Theys explained. "The race tracks in Europe are a little bit bumpier. I believe setting up a car for a smoother track is easier. I'm not too worried though because Porsche gets a lot of data off the car. We should have a good base setup to start with."

Eric van de Poele served as the team's third driver in 2007 but Lienhard said he's looking to get someone who knows the ropes of the RS Spyder.

"We think it will be quite advantageous to have one of the Porsche [factory] drivers," he stated. "They have all of the experience. They're now checking it out now."

With the arrival of two or three RS Spyders to the LMS grid in 2008, Theys predicts a hard-fought championship battle in LMP2 next year.

"I hope to win LMP2," he said. "It will be tough because there will be two other teams that will race with the same equipment. The new Zytek has been going very fast. The old Lola with the AER engine development will be very competitive as well. I think more or less, LMP2 not only in the U.S. but Europe will be the most competitive class."

"Fredy and I started racing together 40 years ago, and our team's relationship with Didier goes back about 25 years," he explained. "All of us still enjoy working together, undertaking new challenges, and winning races. We look forward to the challenge of developing good set-ups for a car that is new to us."

Lienhard has enjoyed a long relationship with Porsche. Driving Carerra RSRs in 1972-1974, the Swiss businessman has also owned numerous Porsche road cars over the years. Theys drove Porsche 956 and 962s in the 24 Hours of Le Mans for a number of seasons, also contesting the twice-around-the- clock French classic with a Joest TWR Porsche in 1996.

When the green flag waves on 2008 season, Lienhard will embark on his 45th year of racing while Theys will start his 31st. Both drivers will now most likely end their driving careers with the manufacturer that helped get them started in sports car racing.

"We finished the circle," Theys said. "We started with a Porsche and will finish with a Porsche. For Fredy and myself, it will probably be our last two or three years of racing. We'll be watching them after that!"